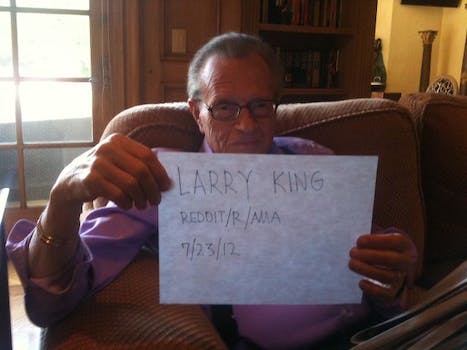 King, one of the world's top interviewers, answered over 100 questions in Reddit's biggest Ask Me Anything thread of the week.

This was the week that one of the greatest interviewers of all time, Larry King, sat on the other side of the desk. The broadcasting legend gave Reddit 114 answers on Monday, and it went so well that King (or one of his assistants) even started a subreddit. In addition to being open and frank, he adopted a very endearing tic: jabbing users about their Reddit names when answering their questions.

To user IAmLarryKing, who wrote “I feel very awkward right now,” King responded “Not awkward! Like I said, imitation is the sincerest form of flattery.”  Before responding to i_am_not_a_goat’s question, King wrote “First, I am also not a goat.”

Also making an appearance was YouTube comedian Zach Anner. Anner, who has cerebral palsy, became a Reddit darling in late 2010, and the site’s users helped him get a show on Oprah’s OWN network, though it was soon cancelled. Anner took the opportunity to announced a new, Reddit-powered travel show called Ridin’ Shotgun.

A few other IAmA archetypes showed up, too—a person who’s lived in Antarctica, a prostitute, a pornographer, and a person whose grandparent has perspective on World War II. That last one has a twist, though—that redditor’s grandmother, who is Japanese-American, was placed in an internment camp in California.

How hard was/is it for you to be non-biased as a broadcaster? (InherentlyBad)

Not hard at all. I was raised on professionalism. The people I admire the most in the business were the people who’s opinions I did not know. Who had the ability to deliver material in an unbiased manner. I always left my ego at the door. My number one motto is and still is “I never learned anything when I was talking.”

2) Hey, Reddit, it’s me, Zach Anner. Remember when you got me that show on Oprah’s Network? Yeah, I lost that. Whoops. But now I host the first Reddit-powered travel show,’Riding Shotgun,’ so AMA!

Why did OWN decide to cancel Rollin’ with Zach? I loved the idea and was looking forward to watching it every week, but then one day I read that it was cancelled. I looked around a bit but couldn’t really find out why. (nick671)

It came down to ratings. A lot of people didn’t have the channel. Plus, I insisted that if I got a second season that I’d do it entirely in Spanish and in space.

3) I spent a year at McMurdo Station in Antarctica, AMA

Did you need to use a refrigerator? (DlmaoC)

4) My name is Amy Page, and IAmA LEGAL prostitute at the world famous Bunny Ranch in Carson City, Nevada. AmA!

Do you kiss clients? (Gih0n)

Yes I do. We do not have to. Most girls choose not to.

If you were buying a car tomorrow, what tricks would you use? (jellyfish137)

Go to edmunds.com and look up the car you’re interested in. Spec it out just the way you want it. At some point in the process, edmunds will ask you if you want to get some quotes from dealers in your area. Say yes, and they will do the emailing for you. When you start getting email replies, start playing the dealers off each other. For instance “dealer A gave me a quote for $100 less. Can you beat it”? At some point you will hit the rock bottom price. That’s the dealer. Go into the showroom with your printed email in hand and ask for that deal. Don’t expect the salesman to welcome you with open arms. It’s a mini deal for his pocket.

6) IAmA Japanese American who was imprisoned in the Internment Camp Tule Lake. AMAA
What was it like when you heard the war had ended? Excited to leave the camp? (BarbSueRoberts)

7) a pornographer for 12 years. I shoot/produce and perform in adult movies. AMA NWS

I think they ruin the fantasy. Just like if you saw wires on a stuntman in a movie.