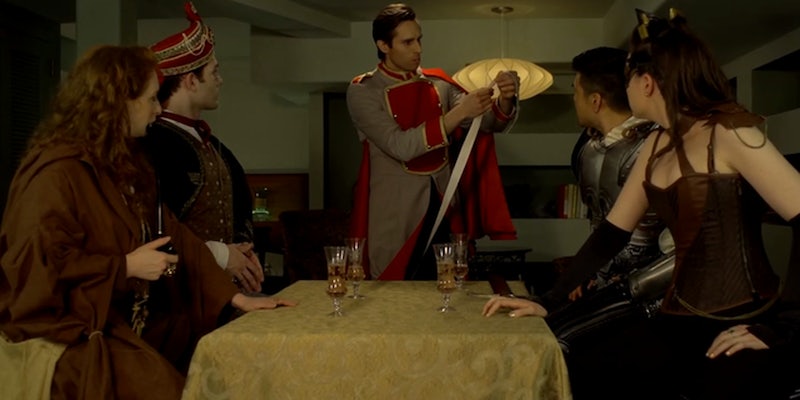 "Life is an extended challenge."

The live-action role-playing (LARP) community has been portrayed in various comedic ways across TV and film, but it’s often a narrow or one-sided depiction. The webseries In Game is attempting to give it another dimension.

The show’s written by Mark Philip Lichtenstein, Zoe Samuel, and Keisha Zollar, who scripted relatable characters: Aaron Eisenberg plays cocky new guy Brayden; Megan Sass is the sarcastic, e-cig-smoking Steinhaus. In the first episode, we’re introduced to the players mid-game in the alternate universe of New Amsterdam, then quickly brought back to life in New York City when the doorbell rings.

Zollar plays Sheila Vandenbroek, the founder of the coterie, who also works in finance. Vandenbroek role-plays as Count de Glacszealin, “a vampire who hails from ancient Polish nobility” who also resembles her “wealthy, upper class white dude boss.” Zollar, who’s starred in Orange Is the New Black and performs with the Upright Citizens Brigade Theater, said Lichtenstein’s experience in the LARP community shaped the show.

“I’ve always been in love with nerd and geek culture,” she said. “We met once a week for six months and wrote it.”

Over the course of 10 episodes, In Game blurs the line between fantasy and reality; the LARP personae are extensions of the show’s characters, as well as a channel for dealing with real-life issues. Zollar says that was intentional, as they attempted a more theatrical take on LARP.

“The character that I play, Sheila—because this is a world that’s made of fantasy—her character in the game, in New Amsterdam, is an attractive white male,” she explained. “Not that Sheila wants to be that, she’s just curious to play that role. Exploring fantasy isn’t about being dissatisfied with your own life; it’s about curiosity and wondering what these things are like as well.”

In Game also subtly explores issues of gender and race within the geek community, which Zollar says was important to the whole crew.

“I feel like I’ve been in many spaces, especially in geek and nerd culture, that tend to not be as diverse,” she said. “Then I go to a con, and I see cons that are very diverse. There’s part of me that isn’t satisfied with the disconnect in terms of representation. There’s a diverse group of people that’s consuming all this geeky, nerdy culture, however we’re not having that reflected back at us. So I think that’s why we wanted to show this is about enthusiasm, and… your desire to want to be in the nerd tribe, less what you look like.”

The female characters in In Game are, refreshingly, not stereotypes of what a “geek girl” might be. In episode 3, Steinhaus remarks she’s selling a tapestry on Etsy that’s a “reimagining of Derek Jeter as the 14th Doctor,” but it doesn’t feel like a forced reference. Zollar’s character is notable because we don’t often see black women represented within mainstream geek culture. She says it “raises everybody up if there’s a vast array of representation, because then it’s about the content, the message, the pure aesthetic of the people… I don’t want to belittle the women who get put into the geek girl aesthetic. I’m not anti-that. I think we need everybody. I feel like I’m having my geeky Sheryl Sandberg moment.

“There are certain aspects of geek culture that have been portrayed that have a certain aesthetic,” she added. “I’m not saying those should go away. I’m just saying that it would be rad to include more people in this narrative.”

In addition to roles on OITNB and Broad City, two shows Zollar says are challenging ideas of race and gender, she’s also involved with An Uncomfortable Conversation About Race, a panel that took place at the Peoples Improv Theater in New York City last December. It’s being made into a documentary; the Kickstarter for the project was successfully funded in October, and the doc is now in post-production. But the idea came last May, initially focused around the bussing of immigrant children.

“Over the summer, while I was already in pre-production, Ferguson happened,” she said. “And then things around Eric Garner happened and then basically the summer exploded and gave it a different weight and context, all of which is valid. It came from other racial tensions, but then the tensions kept mounting over the summer.”

In Game doesn’t address race as directly as An Uncomfortable Conversation, but it does sketch an alternate view of what the community really looks like, and it aims to be accessible to all.

The series’ first season is currently on YouTube, and season 2 is in the works, according to Zollar. They’re currently looking for ways to fund the next season, and waiting to see how people respond. In a way, the tagline for In Game is perfect: “Life is an extended challenge.”

Screengrab via In Game the Series/YouTube