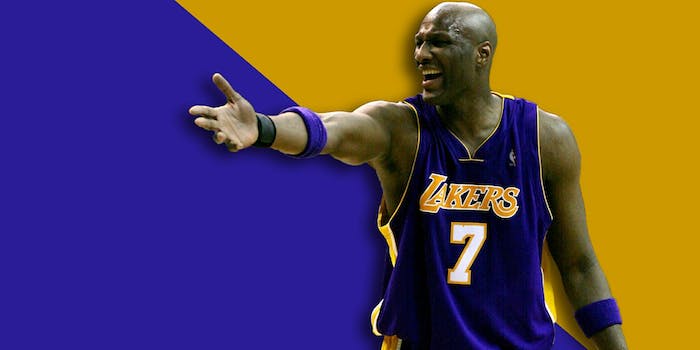 Dwyane Wade encouraged sympathy and prayers for his fellow athlete.

The news that Lakers star and Khloe Kardashian’s ex Lamar Odom was hospitalized after collapsing at a brothel outside of Las Vegas was met with an outpouring of support from his teammates, friends, and other celebrities on social media, who took the opportunity to share messages of hope that Lamar is able to quickly recover.

One of the immediate examples of well-wishes came from former teammate Dwyane Wade, who took multiple tweets to explain how close he still feels to Lamar, encouraging others to have sympathy for the athlete. Wade’s wife, Gabrielle Union, didn’t add her own words, but retweeted a few of Wade’s supportive messages.

PRAYERS all the way UP for my brother Lamar Odom!!!

I can't help but to be up right now… THINKING about my ex teammate/ friend LO.. On my knees praying…please God let him pull thru..

A number of other athletes joined in as well, including fellow Kardashian ex Kris Humphries and LeBron James.

Everyone please pray for @RealLamarOdom to make it through this. Great player, even better person!

So many prayers sent up to you LO! I truly hope this isn't the last stop for you because you still have so much to give, not even to others but to yourself more importantly. Never know what someone is going through unless you're walking in their shoes. No judgement. Straight up homie!

Praying for you LO #luckylefty

Our thoughts and prayers are with Lamar Odom and his family at this time.

Prayers to Lamar Odom. One of the lefties I looked up to growing up! God bless

Prayers go out to Lamar Odom, he's been through a lot, an incredible person, praying for you bro, just fight another battle. #QueensBoys

Y'all pray 4 the homie #LamarOdom & hope he pulls thru!! #Yessiirr…

Thoughts and prayers with Lamar Odom – everyone on the team plane thinking, praying and pulling for well being

And a whole collection of celebrities with no obvious connection to Lamar but plenty of sympathy also sent out supportive messages, like actor Miles Teller and TV host Wendy Williams.

Prayers 4 #LamarOdom. Saddened 2 hear. All of our issues & journeys are unique. Let's continue 2 spread love & understanding. We all need it

Saddened to hear about Lamar Odom.. Hoping he can pull through.

We ALL got some "type" of demon that we need to be delivered from. Lets keep Lamar Odom lifted up in prayer.

Praying for @RealLamarOdom and everyone who loves him. May his spirit feel loved in this moment. #pullthrough 🙏🏾

And even though Lamar is not mentioned by name in this short message from Kendall Jenner, it’s clearly in reference to her former brother-in-law.

The rest of her family hasn’t spoken up via social media, though People reports that at least ex-wife Khloe Kardashian is by Lamar’s side in the hospital.