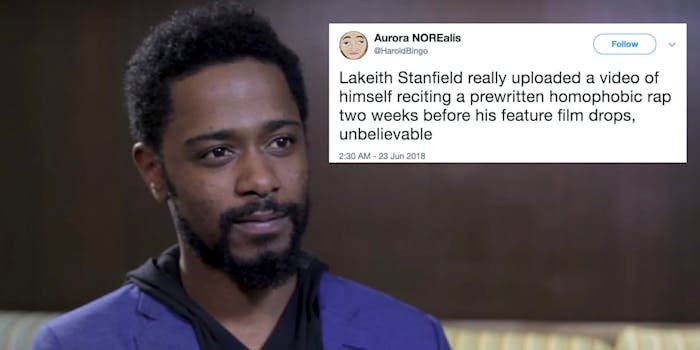 Well, this is disappointing.

Lakeith Stanfield, who starred in Get Out and plays Darius Epps on FX’s Atlanta, is facing backlash on Twitter after he posted an Instagram video of himself using homophobic language as he raps.

His video has been deleted, BuzzFeed News reports, but Stanfield’s original caption said: “Offensive freestyle (not for the easily offended).”

The lyrics included lines like “Boy you’re dressed like trash you a eight six, take that choke chain back, that’s some gay shit” and “Fag, I don’t really want to brag but I’m straight rich.”

So @lakeithlakeith from @AtlantaFX && @Sorry2BotherYou Though this “freestyle” (that you can clearly see him looking down & reading) was appropriate?! Lol ppl are truly Homophobic weirdos Lakeith Stanfield sis you played yourself pic.twitter.com/5N5F7Nexs2

Stanfield, who appears to be reading notes in the video, also raps: “Fuck them bitches out the ass and I’m famous and all these gay n****s mad cause they hate this.”

In another rap video uploaded Monday, Stanfield seemed to allude to the controversial lyrics. “I’m not always in line with the beliefs of my characters. But sometimes I am :),” he wrote in the caption.

On Twitter, fans expressed frustration and anger with the actor for posting the video and reciting anti-gay lyrics.

I was really rooting for Lakeith Stanfield pic.twitter.com/eWoPU0a54W

Lakeith Stanfield actually sat down, recorded himself doing an “offensive freestyle,” and put that shit on his Instagram.

He was calling women all kinds of “bitches,” mentioned negative things about gay men multiple times, and even used the f slur.

People were especially shocked at the timing of the post. It comes just weeks before the anticipated release of Stanfield’s movie Sorry to Bother You. The film also stars Tessa Thompson, who’s an outspoken LGBTQ ally and close friend and collaborator of queer icon Janelle Monáe.

For some, Stanfield’s video pointed to larger problems of people in marginalized communities who “throw other marginalized people under the bus.”

This whole Lakeith Stanfield thing just reinforces a frustrating reality: 90% of the time "woke" people only care about being "woke" along the axis that personally affects them. They're totally ready and willing throw other marginalized people under the bus.

BuzzFeed reports that neither FX nor Annapurna Pictures, distributor of Sorry to Bother You, has commented on Stanfield’s video.

Update 7:08pm CT, June 26: Lakeith Stanfield tweeted a video on Tuesday apologizing for the offensive Instagram rap, BuzzFeed News reports. The actor said he was playing a character and isn’t homophobic but that he’s sorry “if it hurt anybody sincerely.”

“I’m really disheartened by the fact that people are being affected by it,” Stanfield told BuzzFeed News, “that people are feeling sad or anger or any of these negative feelings about the things I’ve done, because that wasn’t my intention at all, to hurt people.”