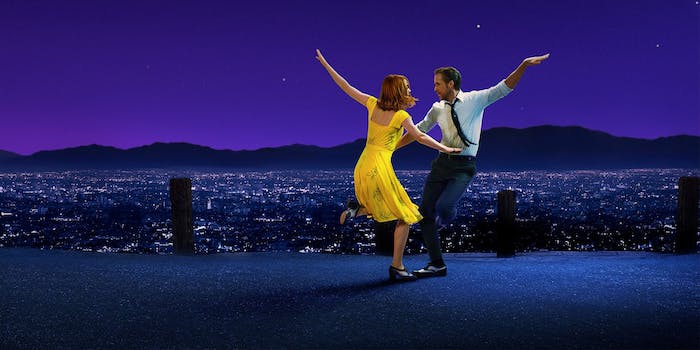 The heralded musical will likely sweep the Oscars, but here’s why it shouldn’t.

La La Land opens with a bright, fancy musical number on a busy Los Angeles express ramp. As the camera pans down and zooms past cars trapped in traffic, we see people of all backgrounds and nationalities. We settle on a 20-something girl, who starts to sing. This isn’t Emma Stone. As she leaves her car and starts dancing, we meet a handsome young man whose name isn’t Ryan Gosling, joining her in song and dance. Then, when the six-minute dance number is over, we settle on the real stars: two white people. The people of color scatter. After all, they aren’t important in this picture.

That was made clearly evident when La La Land swept the Golden Globes Sunday night in record-setting fashion, winning seven awards including best picture for a comedy or musical. This follows a winning streak that has had the film sweeping up most award competitions, including the Critics’ Choice Awards, London Film Critics Circle, National Society of Film Critics, and many, many more.

It is all but poised to win best picture and sweep the Oscars. Even though it shouldn’t.

That’s not to say La La Land isn’t deserving of any of the accolades it receives. It’s a truly joyous picture, reinvigorating a bygone genre and instilling it with a renewed sense of modern hope and optimism. It’s gorgeous to look at, with capable performances from its leads and an infectious spirit that will stay with you far after the last frame has danced on your theater screen.

It’s airy, and it transports you to another era and time. Unlike a lot of the movies that came out last year—such as Lion, Fences, Hidden Figures, or Moonlight—which all deal with relevant social issues, themes, and stories bursting to be discussed. If last year reminded of us of anything, it’s that we need entertainment that transports us to a time where diversity is celebrated, not ignored.

That’s why Meryl Streep’s speech at the Golden Globes—talking about unifying and embracing diversity—resonated with so many people. It touched on the fear of xenophobia that President-elect Donald Trump has made popular during his campaign. The fear of being different has echoed across the nation ever since he first accused Mexicans of being rapists, and it hasn’t gone away since. The need to unite, to embrace our differences and come together is now more prevalent than it has been in some time.

La La Land exists in a vacuum. Its awards season competition does not.

Its white jazz narrative cannot be ignored, either. Ira Madison of MTV goes as far as writing that “if you’re gonna make a film about an artist staying true to the roots of jazz… you’d think that artist would be black.” Indeed in the movie, Gosling’s character (a struggling musician determined to bring back jazz to its former glory) talks openly about the history of jazz while a group of jazz musicians, who are black, stay silent in the background.

The film, with its big musical numbers and splashy Cinemascope cinematography, was made for about $30 million. It stars Hollywood A-listers Gosling and Stone, whom after winning best actor and best actress respectively are now more poised than ever to take home an Oscar.

That’s a lot of money, especially compared to some of the other movies that came out last year which are struggling to connect with audiences. When Moonlight won best picture for a drama at the Globes, the film’s director Barry Jenkins made an impassioned speech urging people to see it and then encourage their friends to see the film as well. That plea makes a lot of sense given the film has only earned to date $13 million on a $5 million budget. La La Land is being touted as an “indie” film, but films like Moonlight or Lion truly earn that moniker.

Moonlight isn’t just another “indie” film, either. It’s a touching, sensitive film that delicately and subtly handles a very heartfelt LGBTQ storyline. It’s a film that most mainstream audiences wouldn’t be bothered to see, and that’s why it needs more attention. It deals with issues and themes that are incredibly relevant. La La Land is being hailed as a timeless classic, but Moonlight is more timely than perhaps any other movie that has come out in the last six months.

There’s also been significant buzz behind the film’s co-star, Mahershala Ali. In an interview with Anne Thompson of IndieWire, Ali talks about the importance and power of diverse roles: “When you are asked to slip into the shoes of somebody who is a reflection of you, as human as others, you have an opportunity to do something just as broad. It’s exciting and new.”

Ali talks about how frustrating it can be for actors such as himself to read for roles who are stereotypes. “They’re written from a certain perspective and point of view,” he said.

Moonlight creates dimensionality for every single character in the film’s narrative. Ali was nominated for a best supporting actor Golden Globe but lost to Nocturnal Animals’ Aaron-Taylor Johnson. Similarly Stone, Natalie Portman, and Annette Benning are assured nominations this year.

But in the shadow of #OscarsSoWhite, there are actors and actresses who aren’t given the same amount of attention.

Fences’ Viola Davis will be all but guaranteed a best supporting actress nomination, but that isn’t nearly enough. There is little buzz for Taraji P. Henson’s knockout performance in Hidden Figures, where Henson plays African-American mathematician Katherine Johnson. Henson talks about the importance of the film’s themes, noting that growing up, math and science were only important to boys. It mattered to her that Johnson was just as intelligent and strong as the male characters of that era.

Henson’s character is a behemoth giant towering over her fellow co-stars, with more confidence and wisdom than most leading women possess in any film that came out last year. Unfortunately it is unlikely Henson will receive a best actress nomination for her work in the film. Henson will have to fight tooth and nail to receive even a sliver of the kind of buzz that actresses like Stone and Portman enjoy.

Even after the controversy of #OscarsSoWhite, it’s hard to be optimistic about the Jan. 24 Academy Award nominations. Yes, the Academy pushed the diversity needle by inviting 683 new members of color, but there have been no new mandates or rules demanding inclusion. (The British Academy of Film and Television Arts set new diversity standards for film awards last year, including a new guideline stipulating films will only be considered if they feature people of color.)

If the Oscars wish to avoid a similar controversy, films that feature diverse casts such as Fences, or films that deal with important and socially relevant themes, such as Hidden Figures, or promote progressive ideas, such as Moonlight, need to be seen and celebrated. Having one or two nominations featuring people of color isn’t enough.

A film like Moonlight embodies the closing statement of Streep’s Golden Globes speech: “We have to remind each other of the privilege [of acting] and the responsibility of the act of empathy.”

Empathy is a responsibility we all share. It is also our shared responsibility to educate, whether in the classroom, library, or movie theater. Buying a ticket to films like Moonlight or Hidden Figures can have a powerful cultural impact. It can be as enlightening as learning about a famous female mathematician who helped change the world. As Streep states in her speech, we must continue our pursuit of facts now more than ever.

So while fancy, bright musicals are fun, it is also important to remember the people dancing, the minorities and people of color, who don’t just fade away when the music stops. They’re waiting to be heard, and seen.