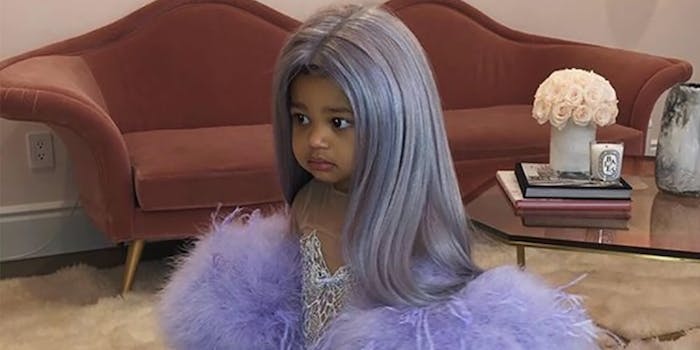 Kylie dressed Stormi as…Kylie. And People are not feeling it

The point is that there is a line and Kylie Jenner crossed it.

On Sunday, many on social media objected to Kylie’s choice of Halloween costume for her one-year-old daughter, Stormi Webster. Most girls Stormi’s age are dressing up as Disney princesses, fun monsters, or perhaps an adorable pumpkin. In a move that would even make Joan Crawford blush, Kyle dressed Stormi… as Kylie.

Jenner attended the 2019 Met Gala wearing a purple wig and a lavender Versace mermaid dress topped off with feathers. This Halloween she decked out Stormi in a smaller version of the same look.

Social media, as they say, was not here for it.

Stormi: can I be Elsa from frozen?

Kylie: no, you’re gonna be mommy at the met gala. pic.twitter.com/cRra8ZFro5

Stormi looks like “I wanted to be paw patrol” pic.twitter.com/lAyTSzSB4R

While many social media users dunked on the photo, suggesting that Kylie should let her kid be a kid, a few posters saw it as more cute than creepy. And others used the costume as a prompt for magical realist microfiction.

Kylie:
Stormi: “Mom you work so hard and I just want to be like you when I grow up, so i’m going to be you for Halloween. Specifically your 2019 Met Gala look bc you went off sis” pic.twitter.com/wTdluYEU8V

It is possible the Twitter users are overreacting here, but it is equally possible that Stormi will have a lot more to say to her therapist about this moment than randos on social media possibly could. Luckily for Kylie, Stormi likely hasn’t developed object permanence yet, so she may not ultimately need psychoanalysis for this one.

In the initial post revealing Stormi’s costume, Kylie already attempted to put some distance between herself and the choice to doll her daughter up as her doppelganger.

Halloween is just one night, but mother-daughter trauma: that’s a lifetime.