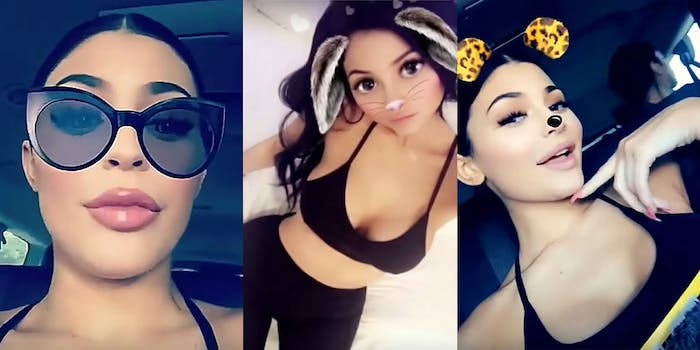 sooo does anyone else not open Snapchat anymore? Or is it just me… ugh this is so sad.

After Jenner’s 24.5 million followers on Twitter saw her tweet, the company’s stock spiraled over 7 percent—or around $1.6 billion in market value, according to the New York Post.

The app’s latest redesign was released early February, but many users, including Jenner, were unhappy with it. Snapchat’s co-founder and chief executive Evan Spiegel said the redesign was an effort to separate media content from friends for users.

“For a very long time, we have been trying to clarify, or at least distinguish, the difference between friends and publishers,” Spiegel said in November, according to the Guardian. “Like, on the Stories page, do you show friends or publishers first? Because our service was really built on this idea of helping friends communicate, we chose friends—and ultimately what that meant is that all of this awesome publisher content was all the way down at the bottom.”

Some Twitter users are tweeting “King Kylie” and saying that if she doesn’t like the redesign, Jenner can become the fearless leader who pressures the tech giant to revert to its original design.

Opposition to the app’s redesign has caused more than 1 million people to sign an online petition calling for the return of the original layout. Apparently, the change is here to stay, despite the petition.

Snapchat wrote a response to the position, saying “its leadership thought long and hard about the redesign and has no intention of reversing the shift,” according to the Verge.

In early February, Snapchat parent company Snap Inc. posted its first-ever quarterly earnings report since going public in spring of last year, and its earnings were much higher than Wall Street expectations, according to the Verge. But that was before Kylie tweeted her dissatisfaction.

If Kylie can’t make them change we are f*cked

Some tweeters thought Jenner’s comments on the app had to do with motherhood (facepalm). One user said Jenner shouldn’t have Snapchat because she’s a mom.

i mean you have a kid and moms dont have snapchat

Kylie is willing to forgive the app, but others on Twitter want her to keep pushing.

still love you tho snap … my first love

If just one tweet can drop the company’s stock by almost 1o percent, imagine what else Jenner can do.