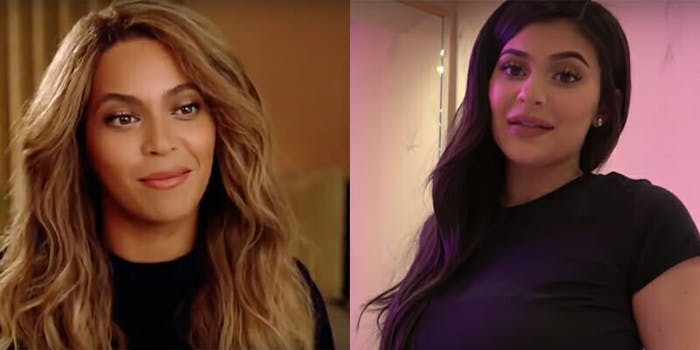 If there was any doubt that the world is already in love with Kylie Jenner’s new baby, Stormi, the numbers speak for themselves.

Jenner’s photo announcing the name of her baby girl on Feb. 5 has already skyrocketed to the most-liked Instagram post of all time, surpassing even Beyoncé’s iconic pregnancy photo from 2017.

Her social media presence is usually omnipresent, but Jenner was uncharacteristically quiet in the months leading up to Stormi’s birth, and fans speculated that she was pregnant despite her silence on the topic. She confirmed via Instagram on Feb. 4 that she had given birth to her first child with Travis Scott.

“I’m sorry for keeping you in the dark through all the assumptions,” Jenner wrote on the post. “I understand you’re used to me bringing you along on all my journeys. My pregnancy was one I chose not to do in front of the world.”

A few days later, Jenner revealed her daughter’s name to be Stormi Webster. The post—which is a photo of Stormi’s tiny hand clinging to Jenner’s thumb—gained more than 14 million likes in the first 24 hours it was up.

Jenner’s photo passed up Beyoncé’s floral photo announcing her pregnancy with twins, which has more than 11 million likes.

“We would like to share our love and happiness,” Beyoncé wrote in the post. “We have been blessed two times over. We are incredibly grateful that our family will be growing by two, and we thank you for your well wishes.”

We would like to share our love and happiness. We have been blessed two times over. We are incredibly grateful that our family will be growing by two, and we thank you for your well wishes. – The Carters