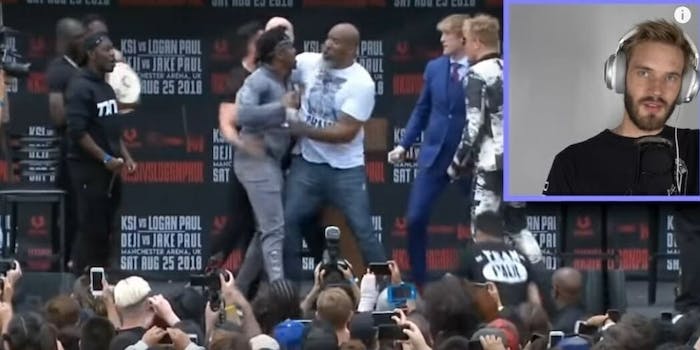 Earlier this month, PewDiePie, who has 65 million YouTube subscribers, called KSI and Paul “scumbags” for their shenanigans leading up to their $8 pay-per-view fight. Previously, Paul had ripped KSI (19.1 million subscribers) for sexually objectifying women, and KSI responded to that by calling Paul (18 million subscribers) a coward.

In response to their feud, PewDiePie said, “Logan Paul plays the moral high ground, and I guess against KSI, that’s not really hard to do. But for Logan Paul to do this, it’s interesting, very interesting. And a lot of people bought it, and he does it really well because he has a strong argument … Now KSI, he is a scumbag. You’re both scumbags. KSI has made the same [sexist] comments about my future wife, Marzia, and I never respond to it because it’s just cringey. … It’s such a low comment.

“…There are so many videos where Logan is equally as bad as KSI in my opinion … These guys are purely driven by money.”

When asked by Metro about PewDiePie’s comments, KSI fired back, referencing PewDiePie’s past tendency to share anti-Semitic jokes on his vlogs and for dropping racial slurs while he’s gaming.

“He has no ground to talk at all,” KSI said. “He is probably … no, he is the person who ruined a lot of people’s lives on YouTube with his comments and with his whole anti-Semitism. But he’s still around. It’s his opinion. I don’t really care.”

In recent days, Paul and his brother, Jake Paul, have claimed they want to compete against professional mixed martial arts fighters. Perhaps KSI would be best suited to try to get PewDiePie in the ring with him next.