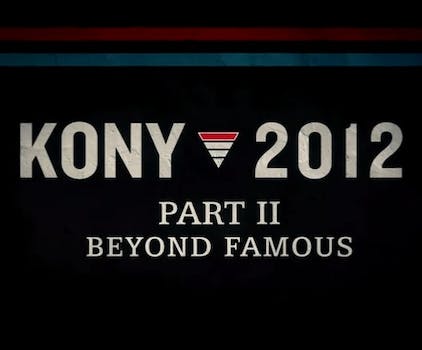 The new documentary addresses some of the criticism lobbied at the nonprofit Invisible Children and builds anticipation for Cover the Night on April 20.

“Kony 2012 Part II” addresses some of the criticism lobbied at the group and its campaign to hunt down African warlord Joseph Kony. The video does not feature its predecessor’s director and Invisible Children cofounder Jason Russell this time around, following his arrest.

It also encourages viewers to participate in the Cover the Night event, where supporters are asked to blanket their cities with Kony-related posters and other material on April 20.

The original “Kony 2012” video has been viewed almost 87 million times on YouTube alone, with the Vimeo version having been watched 17.8 million times after making a colossal splash last month. It’s been described as the fastest-growing viral video in history.

The follow-up arrived a couple of days later than anticipated, though it remains to be seen whether it will be as big of a hit as the first documentary.