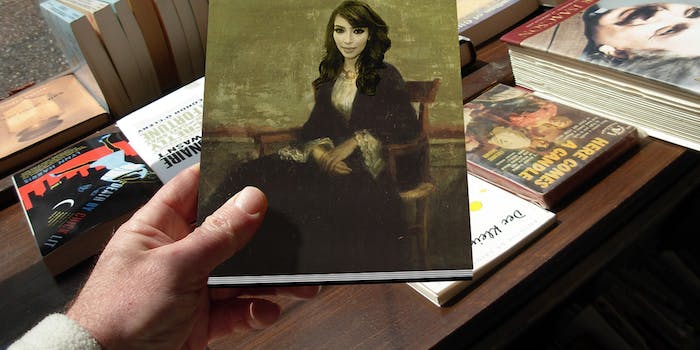 Kim Kardashian’s ‘Selfish’ is a work of art

Kim’s butt, and her face, and her clothes, and her selfies? They’re historic.

Kim Kardashian’s new book, published by Rizzoli, a purveyor of fine-art coffee table texts, is called Selfish. It’s called Selfish because it’s a book of selfies—selfies with friends, selfies in Thailand, nude selfies. Some selfies have no captions, while others feature short notes in her own handwriting, usually marking the occasion upon which the selfie was taken, or Kardashian’s feeling on that particular day, on set at that particular photo shoot. Many of the selfies in the book are new (new to the public, that is); others have appeared on her Instagram account, which currently has 31.9 million followers (I am one of its devotees).

Since Kardashian first appeared as the closet-organizer of her friend Paris Hilton, people have had Things to Say about her and her family, now worth untold billions of dollars via their E! show, their makeup lines, Kim’s video game, Rob’s sock line. People also have Things to Say about Selfish, most of which can be summed up in a tweet from the writer Rachel Syme, whose recent Matter piece elucidates perfectly Kim’s importance to culture and to us.

Is Kim’s butt art? Paper Magazine thinks so. Fashion photographer Steven Klein, too (also, Kanye). I happen to think her deployment of it is demonstrative of an understanding of objectification, desire, and surveillance not yet surpassed by anyone showing at this week’s Venice Biennale, but I also think it’s something more than art. Kim’s butt, and her face, and her clothes, and her selfies? They’re historic. They are, quite literally, history being made.

And there’s precedent for that.

Kim Kardashian has close historical analogs in women diarists who knew, both objectively and in their bones, that they’d soon be famous, that momentous occasions were momentous occasions worthy of being documented. Take, for example, the selfies of Kim with Paris Hilton, taken mostly in 2006, the year the latter’s fame seemed to be at its dizzying peak, the former working as her assistant. The pictures themselves remind us of the rise of Hilton, of course, the rise of this idea that one could construct one’s own fame narrative using a cameraphone, but also that by proximity Kardashian herself was also being coronated—inducted into a kingdom over which she would one day rule.

Reminiscing about the 1st time we went to Ibiza in 2006! @parishilton it was so good to see you & catch up!! Loves it lol

Queen Victoria was a prolific diarist, and she, too, wrote about her own 1837 coronation breathless terms:

I went first to the robing room in the House of Lords, but as there were so many people there, I went to a dressing room where I put on the robe, which is enormously heavy. After this I entered the House of Lords preceded by all the officers of state, and Lord Melbourne bearing the sword of state walking just before me. He stood quite close to me on the left hand of the throne, and I feel always a satisfaction to have him near me on such occasions, as he is such an honest, good, kind-hearted man and is my friend, I know it.

Victoria knew this day was worth putting to paper, but she also knew (or suspected) that no one would see this diary during her lifetime. Only after her death, after many years on the throne, would anyone know how she felt during this historic occasion. Kim, in Selfish, cuts out the decades of waiting and says, “Here. Here is how I felt three years ago and how I feel now. Three years ago was history, and so next week shall be, too.”

Maria Bashkirtseva was a Ukrainian-born, French-raised teenager who, in 1876, wanted to be famous. She had the soul of an artist, she believed, and she loved to paint, and to draw, and to sing and to travel. She knew, writing in her diary, that fame would come to her one way or another, and it did—in death. Maria died of tuberculosis in 1884; shortly after, her diary was published and became a symbol of teenage girlhood in all its triumphs and disasters:

Poor diary, it contains all my strivings toward the light, all those aspirations that would be considered those of an imprisoned genius if they were crowned in the end with success. If, on the other hand, I never come to anything, they will be looked upon as the conceited ravings of a commonplace person.

Strivings toward the light! Couldn’t we put that very same phrase underneath every one of Kim Kardashian’s selfies and have it be entirely accurate? Perhaps altering the tense to make it clear that she isn’t actually striving but actually reaching the light every time she snaps a photo?

Kardashian is both historian and historical subject, and that’s something people have been trying to accomplish since the idea of the past, present, and future as separate entities was birthed. She’s chronicling her own peaks and valleys while living them and also, somehow, identifying moments from the recent past that will become history 20 years from now and using digital media as her archiving system. Perhaps the best example of this is her addressing of the recent nude photo hack that saw women in Hollywood terrorized by men on the Internet who’d hacked into iClouds and released intimate images of Oscar winners and Disney stars alike.

Kardashian has always maintained tight control over how we see her body, though we’ve seen lots of it. She’s in Playboy looking sexy and having labor pains on TV looking maternal and both images are of her own, if not devising, then presentation. A fully nude Kim appears in Selfish in a shot obtained by hackers last year. Her caption for the picture?

“I wasn’t intending to put these in the book but saw them online during the iCloud hack. I’m not mad at them. lol They are taken with a Blackberry and I don’t have iCloud…it’s all a mystery!”

That “lol”! When hackers tried to take control over her image away from Kim, she said “lol”! How many words have been written about the hack? Have any of them come closer to understanding the shrugging, banal horror of the digital age more than Kim’s “lol”?

It’s the third season premiere of Keeping Up With the Kardashians, in the spring of 2009. En route to sister Khloé’s court appearance, Kim can be seen in the corner of the frame holding up a very 2009-looking phone as Kris, her mother, exasperatedly shouts: “Kim! Stop taking pictures of yourself, your sister’s going to jail.” And so one Kardashian’s brush with the law is viewed through the lens of E!’s cameras but also through Kim’s face. If this isn’t why the Internet exists, and if this isn’t worthy of memorializing in book form, what is?