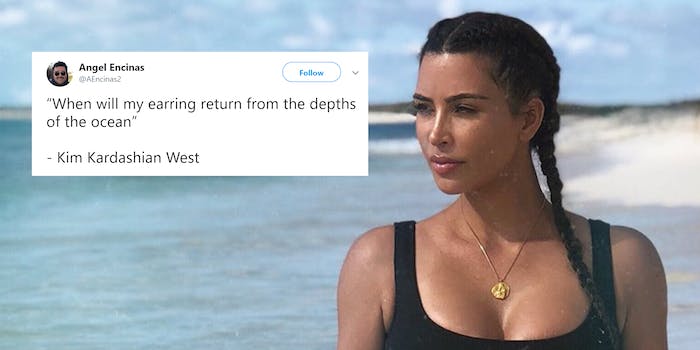 Fans couldn't stop referencing an iconic moment from 'Keeping Up With the Kardashians.'

When Kim Kardashian shared videos of her paddle boarding on Twitter yesterday, dozens of her fans couldn’t help but make the same joke, referencing an infamous moment from Keeping Up With the Kardashians.

In the episode, which aired on Aug. 28, 2011, Kardashian loses a pair of earrings worth $175,000 after her former husband Kris Humphries throws her into the water at Bora Bora. She immediately notices that one of her diamond earrings is missing and bursts into tears—and an iconic moment in the reality TV show is born.

That is the scene fans reminisced about after Kardashian shared videos of her in the ocean.

Fans on Twitter jokingly asked if she was still looking for her earrings.

Are you still looking for that diamond earring

You found your diamond earring yet?? 😂😂😂

Sis still looking for her earring

“When will my earring return from the depths of the ocean”

Very funny, folks. But any faithful viewer of Keeping Up With the Kardashians knows that Kylie Jenner saved the day and found Kardashian’s earrings at the bottom of the ocean.

Correction: The original air date for the infamous episode of Keeping Up With the Kardashians is Aug. 28, 2011.