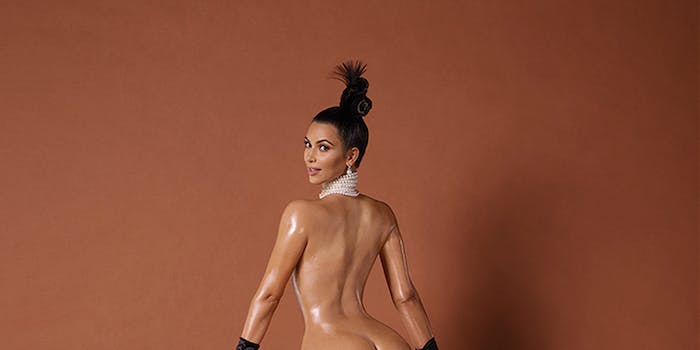 The nude photos Kim Kardashian wants you to see

Will she break the Internet after all?

Kim Kardashian woke up Wednesday and decided to mold the Internet in her image—her naked, champagne-washed image.

The appetizer hit Kardashian’s Instagram profile—it helps that Kardashian’s account is the third-largest on Instagram—and it showed off the reality star’s oiled up, fully naked butt. It was artfully shot for the upcoming winter issue of Paper magazine.

Paper Magazine new cover alert! – such a honor to work with the legendary 📷 Jean-Paul Goude!!!! Shot this in Paris. Can’t wait for you to see the the whole issue 🙈


Now, in an almost surely coordinated stroke of genius, the New York City magazine released its Kardashian interview… and the rest of its Kardashian photos Wednesday evening. There is ample full frontal (link NSFW).

Because we know you came just read the article @PaperMagazine …..;-) http://t.co/uy0nl1R0wd

Lament the hollow nature of the act, or speculate about her surgical enhancements, the point is that the cultural cycle remains the same: Famous person gets naked. #BreakTheInternet? Probably not. But she knows what she’s doing.