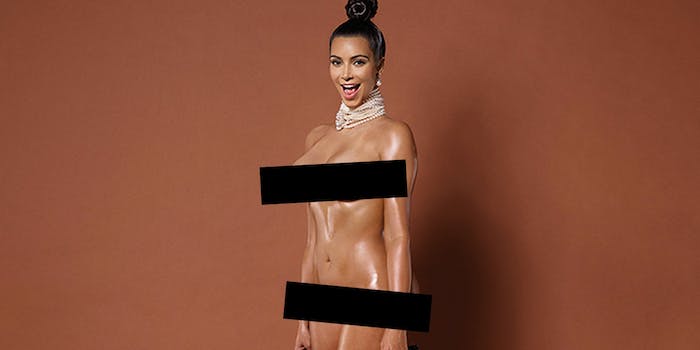 The most interesting thing about Kim Kardashian’s full frontal

When I saw the words “Kim Kardashian full frontal” and immediately clicked through (of course I did), I was surprised by what I felt—and no, that’s not a boner joke.

Mrs. West looks bangin’ in her fully nude spread for Paper magazine. Of course she does. But her facial expression is ultimately the most interesting thing about that picture.

We know you came for the article. @kimkardashian shot by #JeanPaulGoude for our #BreakTheInternet issue. Click for the #NSFW image in our bio.

A photo posted by Paper Magazine (@papermagazine) on

Long after this particular image of her particular boobs and vagina have faded into the not-at-all particular stream of boobs and vaginas that ripples through every American’s subconscious, that facial expression will still be interesting. Kim Kardashian looks really, really happy in that picture, and I feel happy for her.

We told you there was more to come. @kimkardashian shot by #JeanPaulGoude for our #BreakTheInternet issue. Click for the #NSFW image in our bio.

A photo posted by Paper Magazine (@papermagazine) on

I’m not a particular Kim Kardashian apologist. I’ll watch the shows at the gym, when I get to the gym. I don’t play her game, although lots and lots of people do. Honestly, I expected to be a little grossed out by the full-frontal picture. She’s greased up to an almost illogical degree, and merely posing nude isn’t normally a thing that primarily makes me think, Hey, good on you. I noted the earlier butt photo and moved on, impressed but unmoved. But now, with the full frontal—that face! She’s got me.

Of all of the facial expressions to choose for a full-frontal nude photograph that will immediately and undoubtedly be seen by more people than the Super Bowl, Kim went with one that seems more appropriate for a surprise party, or the opening credits of a ’90s sitcom. And that is absolutely delightful to me.

That face is saying, “HAYYY GIRL! I’m the nakedest!” It’s not a sexy smoulder, a half-lidded blowjob face, or anything you’d expect from the phrase “Kim Kardashian full frontal”—she is having a great, goofy time. From the neck up, she looks like someone pulling off her nightgown in the middle of a fancy dinner party. From the neck down, it’s a different kind of dinner party, but the overall effect isn’t as much sexy as it is fun. It’s been said that she has a “light in her eyes.” She looks almost innocent: playful and unrestrained. She looks happy, she even looks kind of funny.

That face seems to anticipate (because both the Kardashians and the Wests do nothing if not anticipate) any criticism and wave it away. What are you going to say to that look of pure joy? You want her to feel bad because she’s someone’s mother? Look at that face: She is someone’s mother and she looks damn good being one. You want her to cover up and get a real job? Look at that face: She’s turned her body and image into a multimedia empire. You don’t care because we’ve seen it all before? Look at that face: It knows you’re looking. She’s showing us the most famous body in America, again, and we’re all looking, again.

Looking at these photos, I feel strangely proud for her. She might be stark naked, but she has never looked more in control. Break the Internet? For sure. Kim Kardashian’s face is a troll face, and it’s beautiful.