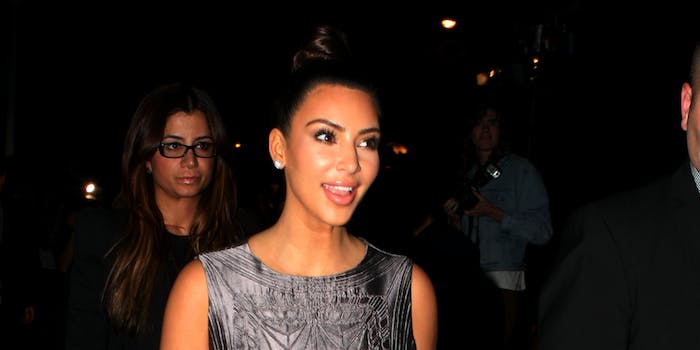 This article contains sexually explicit material and may be unsafe for work.

Kim Kardashian started a conversation about the vastly different experiences of pregnant women by proudly sharing a selfie showing off her own pregnancy on Tuesday.

Kardashian saw firsthand how cruel people can be after the tabloids mocked and criticized her for wearing clothes that were too sexy and for gaining too much weight during her first pregnancy. She’s still getting those kinds of comments now that she’s pregnant again, but this time she’s received two opposite critiques: Some people say she’s too big, while others say her stomach is too small at this point in her pregnancy.

No matter what she does, Kardashian can’t seem to please some people. But she can have the last word. As a big middle finger to the haters, Kardashian posted a nude selfie showing off her body—one she says is unfiltered and not Photoshopped.

She explained that her stomach—which is, friendly reminder, currently carrying a human child—looks different depending on what time of the day it’s photographed and whether she’s eaten recently. Besides, Kardashian’s social media habits are too well-documented for her to hide something like a surrogate.

Some days I'm photographed before I eat & look smaller, some days I've just eaten & I look bigger. It's all a part of the process.

U know me well enough 2know I would document the process if I got a surrogate.Everyone's body is different,every pregnancy is very different

Kardashian and her husband, Kanye West, have already broken boundaries about what we talk about when it comes to pregnancy. Kardashian in particular has spoken about their troubles conceiving their second child on Keeping Up With the Kardashians and even brought the cameras into appointments with a fertility doctor.

But more importantly, Kardashian zeroes in on a key point: not all pregnancies are exactly the same. She’s just grateful that she’s pregnant again and loving whatever state her body is in.

I've learned to love my body at every stage! I'm going to get even bigger & that's beautiful too! I'm blessed to even be pregnant!

& luckier to not have preeclampsia so far, so I don't have the swelling issue! They also say your body carries a boy different than a girl

I'm grateful to God for this miracle & no matter what rumors or comments you throw my way this time they truly don't affect me!

She also posted the photograph to Instagram, which is still online—for now. But since Instagram has an inconsistent (at best) policy on what constitutes the community guideline rule against nudity, who knows how long it’ll stay online.

Chances are, Kardashian is only worried about one thing when it comes to her pregnancy and the eventual birth of her son: that he’s healthy.

Wishing all of the moms out there a happy & healthy pregnancy & delivery! #MiracleFromGod #Blessed