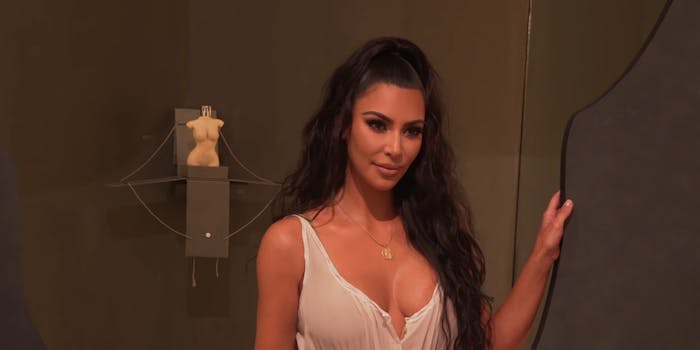 She has a history of pushing this shady medication.

Kim Kardashian has posted some dubious products on her social media accounts over the years, and one 2015 post about a morning sickness pill made her a sizable commission.

According to a report from STAT—which obtained a July 2015 contract between Kardashian’s company, Kimsaprincess, and Duchesnay USA, the maker of morning sickness pill Diclegis—Kardashian made $500,000 from a July 2015 post about the pill, which did not carry any information about warnings or side effects.

In the post, she states that she has partnered with Duchesnay to promote the medication and assures it’s safe for the mother and the baby. There was no mention of the medication (under a different name) being pulled from the market in 1983 after lawsuits claimed it caused birth defects. Kardashian had to issue another post after the FDA sent a letter to Duchesnay about the lack of risk information.

The backlash was apparently helpful: Sales of the medication went up 21 percent in fall 2015, according to STAT.

Duchesnay kept working with Kardashian on follow-up posts, though it’s not clear how much, or if, she was paid for those. She posted about Diclegis again in the spring and summer of 2017, but the July post reads much more like a pharmaceutical ad. In January, the effectiveness of Diclegis was called into question.

There’s also the cost gap: After Kardashian’s posts, Duchesnay reportedly raised the price of Diclegis to $585 for a month’s supply. Right now it costs roughly $430.

Last month she deleted a post about Bonjesta, a newer version of the medication, after backlash from fans. Bonjesta was relaunched in April 2018, which means Kardashian couldn’t have used it during her pregnancies. Singer Jana Kramer is also promoting Bonjesta for Duchesnay.