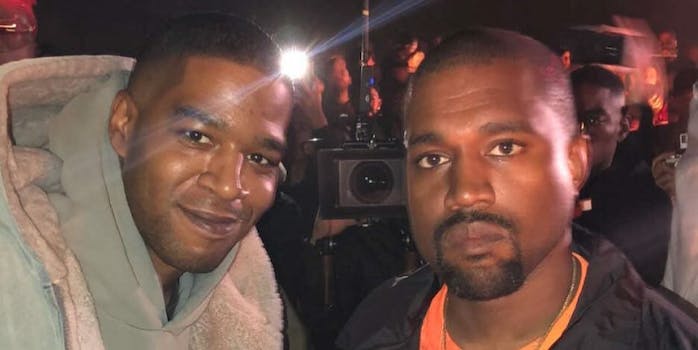 Sanded down to 7 songs, the turbulent album reels in the noise.

When he first met Kanye West, Scott Mescudi was nothing more than a fan. In 2004, he moved almost 500 miles from Cleveland to New York to pursue music under the rap name Kid Cudi. Shopping for CDs in a Virgin Megastore, he and West unexpectedly crossed paths. Cudi pitched himself as an artist and failed.

Since that first encounter, things have changed drastically. For one, people don’t shop for CDs anymore. On Friday, the duo released their joint album, Kids See Ghosts. Much like the long-standing relationship itself, Kids is an intricately layered, beautiful mess.

Kid Cudi has grown into an enormously influential soul in hip-hop, making his presence known by often turning the genre onto its head and creating alternatives to the status quo. He’s collaborated with West for landscape-shifting, career-defining works like 808s and Heartbreak. His own debut Man on the Moon became a cult favorite among the internet rappers who would go on to conquer radio.

But, as strong as their creative connection has proven to be, West and Kid Cudi have shared an intimately turbulent and detrimentally public relationship. Their differences have caused fallouts, for Cudi to leave West’s G.O.O.D Music label, and for them to eventually reunite again on several occasions, as friends often do.

Sonically, Kids does a phenomenal job at remaining true to the sounds that made fans fall in love with both artists. Though Cudi’s touch seems more prominent throughout, it does well to offer stylistic elements that recall G.O.O.D Music’s rise to prominence nearly a decade ago. The composition and instrumentation are unique, masterfully executed, and Cudi’s hum still strikes to the core enough to make listeners space out. With its sharply selected and creatively edited samples—Kurt Cobain, Louis Prima, Shirley Ann Lee—it’s the caliber of music that artists pray to release and fans wait for.

However, its charm doesn’t make it immune to its discombobulation and miscalculations. The opening track, “Feel the Love,” could have easily gone without West’s jarring and obnoxious onomatopoeic sounds that carry its outro. Cudi dominates the majority of the album; while West brings an occasionally urgent energy to the table, reveling solely in the dark, somber ethos of Cudi’s melodies would have been nice.

Still, standouts “Kids See Ghosts” and “Freeee (Ghost Town Pt. 2)” are only special due to both of their inputs. West’s biggest contribution becomes as an executive editor—bringing in Andre 3000, Evan Mast of electronic band Ratatat, Pusha T, Jeff Bhasker (“All of the Lights”), Andrew Dawson (Late Registration), Mos Def, Ty Dolla Sign, and the oft-forgotten crooner Mr. Hudson, plus the usual in-house roster of G.O.O.D. producers, to sand down these seven songs.

The album’s release was disorganized and did the project no favors. Similar to the botched debut of last week’s Ye, a flawed livestream filled with server errors and crashes on the Wav app deprived fans of the music for hours. The album first arrived Friday morning, not on Apple Music or Spotify, but the fledgling streaming service Tidal. The uploaded tracks arrived mislabeled. That kind of dramatic rollout does nothing but bring attention to where the album may fall short.

Three albums into West’s five-album plan that includes West-helmed releases from Nas and Teyana Taylor coming this month, in addition to last week’s divisive Ye and Pusha-T’s brooding Daytona, this longtime dream collaboration survives the hype. It has its faults, but Kids is definitely well worth the listen. Or probably multiple.