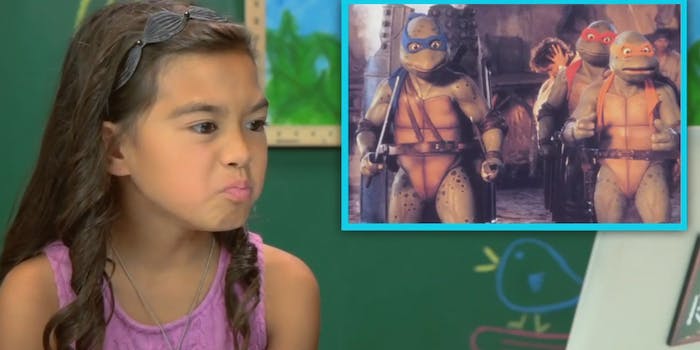 These aren’t the silly cartoon turtles I remember as a kid.

The new Michael Bay-produced Teenage Mutant Ninja Turtles movie comes out next month, and from the trailer alone, you can tell it’s going to be somewhat terrifying for kids, and possibly adults. These aren’t the silly cartoon turtles I remember as a kid. When did they get so… ripped and angsty?

The Fine Brothers decided to show the old-school turtles to kids, as part of their Kids React: Retro TV series. Unsurprisingly, many of the kids didn’t know there was a ‘90s version. “I should know about the past,” one girl says, somewhat distressed.

When shown the explosion-filled trailer for the new movie, the reviews were mixed. One girl remarks that they’re trying to make the turtles look too much like humans. There’s also some nuanced discussion of what happens when a cartoon from your childhood is remade and ruined. Did these kids know there have been Teenage Mutant Ninja Turtles movies in the past?