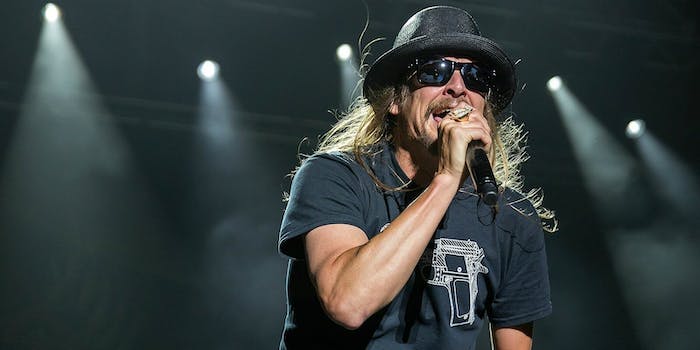 Kid Rock does not mince words.

Nobody seems to know for sure if Kid Rock will  run for Michigan’s Senate seat in 2018.

He announced last month that the Kid Rock For Senate website was real, though a day later, he said he probably wouldn’t run. A couple weeks after that, Kid Rock—whose real name is Bob Ritchie and who happens to be an ardent Donald Trump supporter—announced he had created a non-profit for voter registration, but he also said, “I absolutely will use this media circus to sell/promote whatever I damn well please.”

Even though it’s unknown if any of this is serious, Common Cause—which describes itself as a “nonpartisan grassroots organization dedicated to upholding the core values of American democracy”—is treating it as such, filing a complaint with the Federal Election Commission and the Department of Justice accusing Ritchie of violating federal election laws.

I am starting to see reports from the misinformed press and the fake news on how I am in violation of breaking campaign law. #1 I have still not officially announced my candidacy #2 See #1 and go fuck yourselves. Everyone else, Have a great Labor Day (I will be spending mine WORKING in one of the greatest cities in America – Grand Rapids, Michigan!!) Rock on – Kid Rock

Despite Ritchie’s declaration for everybody to “go fuck yourselves,” Common Cause said he’s violating laws by acting as a Senate candidate while “failing to register his candidacy, comply with contribution restrictions, and publicly disclose contributions to his campaign.”

Common Cause also has targeted Ritchie’s label, Warner Bros. Records, and accused the company of acting as a conduit for campaign contributions.

“Regardless of whether Kid Rock says he’s only exploring candidacy, he’s selling ‘Kid Rock for Senate’ merchandise and is a candidate under the law. This is campaign finance law 101,” Paul S. Ryan, Common Cause’s vice president for policy and litigation, said in a statement. “Given the activities we’ve documented in the complaint, he can’t reasonably claim to be merely testing the waters of candidacy and thus exempt from candidate filing requirements. He is a candidate and is obligated to abide by all the rules and make the same disclosures required of everyone else running for federal office.”

More from the Detroit News:

In its complaint, Common Cause says it believes Ritchie received or spent more than $5,000 through the purchase or sale of the “Kid Rock for US Senate” merchandise via the website.

That would trigger the requirement under federal election law that candidates for office register with the FEC within 15 days of surpassing the $5,000 threshold for contributions or spending.

It’s unclear what Ritchie has spent or received, since he hasn’t filed a campaign finance statement.