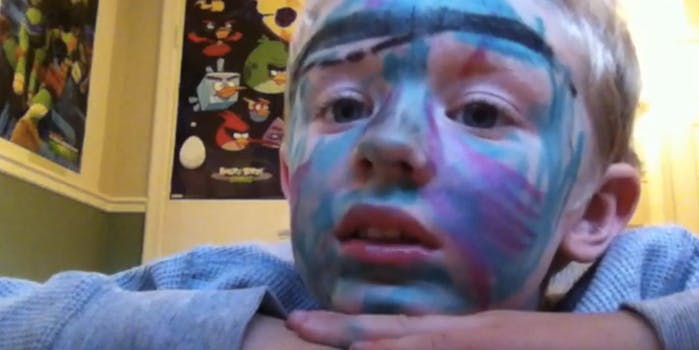 Vloggers are starting younger and younger.

YouTube’s top vloggers should be quaking in their boots as their challengers get younger and younger. Meet Ben, who’s been making YouTube videos on his family’s iPhone and iPad (unbeknownst to them) for weeks.

Ben’s dad Scott Coates discovered hours of footage Ben had taken on the iPhone and iPad, edited together the best, and shared it on YouTube to the tune of 32,000 views. Instead of it just being random shots, it’s actually the bare bones of Ben developing his own Web personality—one that’s definitely obsessed with zombies and Star Wars.

Stylistically, Ben’s got YouTube down pat. He opens most of his segments with “Hey, guys,” assuming his growing audience. He claims he “hasn’t done one of these in a while” even though he’s never done videos before, which really builds the idea of a deep content backlog to explore. He’s even got a branding mind, calling out Hasbro with suggestions for toys and asks for companies to send him freebies.

Now that dad knows Ben is video-inclined, we suggest he invested in some camera equipment and start up a channel. He’s an Audible deal away from taking over the YouTube world.