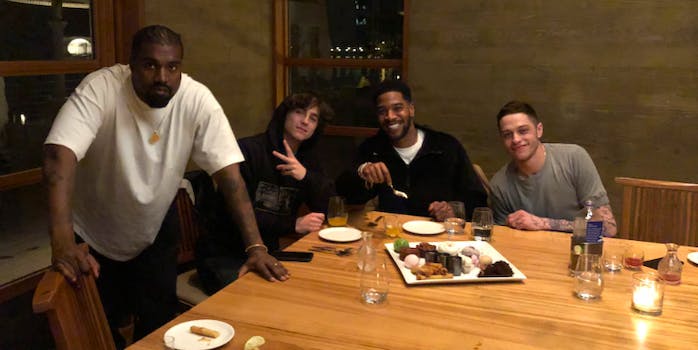 Is this the weirdest group of celebrities in one photo?

Last night, Kim Kardashian West posted a series of photos with Kid Cudi, Kanye West, Pete Davidson and Timothée Chalamet hanging out, seemingly having a great time. Yes, you read those names right. It’s an odd combination of people. How do they know each other? Why were they together? Well, Kim’s caption said, “Happy Birthday Kid Cudi,” so it seems they were there to celebrate Cudi’s birthday. But, still why this group?

People on Twitter were equally as confused. “Is it just me, or did no one else expect these four people to be in the same room together?” someone responded to Kim.

“Simulation is acting up,” someone else noted.

“Just woke up and the first thing I see is these four people together never been more confused in my life,” someone on Twitter said.

Some people compared the photo to Leonardo da Vinci’s “The Last Supper” painting.

I can’t tell the difference pic.twitter.com/bMj087QjQO

Let’s unpack this. The most obvious connection here is Kanye West and Kid Cudi. The artists are longtime collaborators. Last summer, they released their joint album, Kids See Ghosts.

Davidson has publically expressed his love for Cudi. In 2016, he told the Breakfast Club that if Man on the Moon didn’t come out, he wouldn’t be here. “I would’ve killed myself if I didn’t have Kid Cudi,” he said. So it makes sense that he would be there to celebrate his birthday.

The real wildcard here is Chalamet. People on Twitter want to know how he fits into this puzzle.

The only connection I can find is that the two have gushed over each other on Twitter recently.

And that seems reason enough to invite someone to your birthday. So, there you have it, folks. Maybe the simulation glitched or maybe the world of celebrities is just as elusive as we have been led to believe.