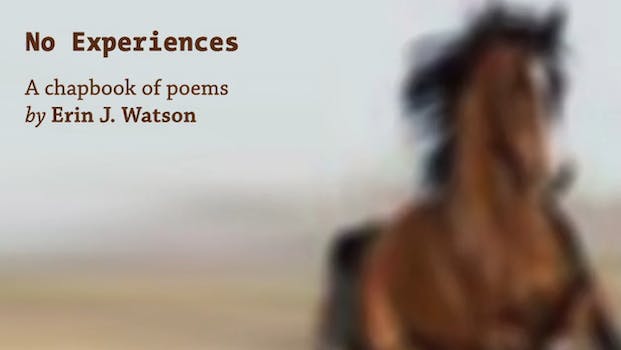 Kickstopper: “No Experiences (or, 24 Ways of Looking at a Spam Horse)”

Erin Watson wants to publish a chapbook of 24 poems inspired by the absurd tweets of beloved Twitter bot @Horse_ebooks.

Erin Watson, a Chicago, Ill., resident who works as a researcher at a local nonprofit, has started a Kickstarter campaign to publish a chapbook of 24 poems inspired by @Horse_ebooks.

For those somehow unfamiliar, @Horse_ebooks is a bot account that tweets nonsensical passages lifted from books in between unwanted links to throw off Twitter’s spam filter. The esoteric nature of these tweets has garnered a sizeable following— 97,407 admirers as of this writing— and has inspired similar accounts, including one that takes random text from old New York Times articles. There’s even @Horse_ebooks T-shirts, an annotated guide, and a Mitt Romney-style bot.

For Watson, the enigmatic bits of text were inspiring enough to use as the foundation for her poems.

“There’s plenty of spam on the Internet, but @Horse_ebooks has a way of being evocative and absurd,” she claims in her pitch video. “It was already doing something that seemed poetic to me, and I wanted to pursue that.”

Watson also told the Daily Dot that her decision to incorporate @Horse_ebooks tweets in her work was largely caused by a spat of writer’s block.

“I needed some kind of constraint or concept to help out with my writing,” she said. “It’s much less intimidating to start an endeavor as a writer or as an artist if it starts off as play.”

Before long, Watson had completed a fair number of poems that were polished enough for publication. That’s when she had the idea to publish a chapbook—a pocket-sized booklet— showcasing what she had written.

Called No Experiences (or, 24 Ways of Looking at a Spam Horse), a title inspired by her favorite @Horse_ebook tweet, the project took off quickly on Kickstarter. The book has 106 backers for a total, at last count, of $2,040—$340 over the campaign’s fundraising goal.

For their support, Watson will be mailing them a copy—or three—of the book, depending on the amount pledged.

“It was easy to capitalize on the concept because @Horse_ebooks is so popular and has such a wide following,” she said.

Watson also credits the level of earnestness and sincerity in her endeavor for her project’s success.

“I don’t think it would have succeeded if people thought that I wasn’t being genuine.”

Kickstopper: No Experiences (or, 24 Ways of Looking at a Spam Horse)

Correction: An earlier version of this article stated that Watson refused to share examples of her work. She has poems available on her site.