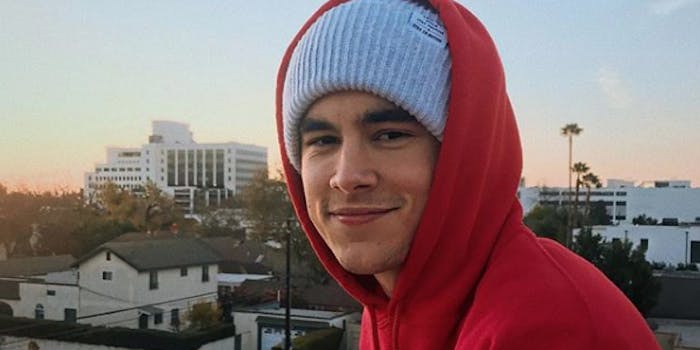 His fans are not going away quietly, however.

Kian Lawley has been cut from the cast of a teen movie about race after a video of the YouTube star using anti-Black slurs resurfaced online.

Lawley, who got his start in YouTube supergroup Our2ndLife and has over 3.3 million YouTube subscribers, was set to play Amandla Stenberg’s boyfriend in a movie adaptation of The Hate U Give, a popular YA novel about police brutality and Black Lives Matter, but Fox announced Monday that his role has been recast and all scenes featuring Lawley will be reshot.

The decision comes after a 12-second clip was uploaded to YouTube Jan. 26, featuring Lawley apparently dropping the N-word while hanging out with friends. The audio has been bleeped to ensure the video stays up, but at one point, Lawley faces the camera and pronounces the word clearly enough to read his lips through the bleep. It’s unclear how many times exactly Lawley uses the slur in the clip:

Social media backlash was swift, and Lawley apologized via Twitter Sunday, writing that “if u don’t learn from ur mistakes, u can never grow as a person.”

if u don’t learn from ur mistakes, u can never grow as a person.

i’ve learned a lot & i am grateful to have the power to change. i never want to be who i was yesterday. we’re in a constant battle to become a better version of ourselves, use ur voice as ur weapon.

“Feel free to love your fave. But know that there is a TON of pain associated with this,” Thomas wrote. “More than you know.”

Though Thomas didn’t get into specifics in her tweets, she did indicate that the time since the video’s upload had “been hell” for her and that she’d “been trying” out there—”trying” most likely meaning using what influence she has as the book’s author to impact Fox’s casting decision.

Feel free to love your fave. But know that there is a TON of pain associated with this, more than you know. If I subtweet, I subtweet. I do what I want on my Twitter because yep, I'm a grown woman.

The past two weeks have been hell for me, but I'm the enemy. Y'all. I've been trying. You just don't know.

Thomas’ concerns were answered Monday afternoon via a statement from a spokesperson for Twentieth Century Fox Films. In a note to Variety, they wrote: “Due to the controversy surrounding his past comments and behavior, Kian Lawley will no longer appear in The Hate U Give. The studio plans to recast the role of Chris and reshoot scenes as needed.” There’s no word yet about who will be replacing Lawley or what this means for the movie’s release date, but Issa Rae, Regina Hall, and Common are all also in the film.

This news comes days after YouTube announced plans to crack down on accounts publishing disturbing content on the streaming service.