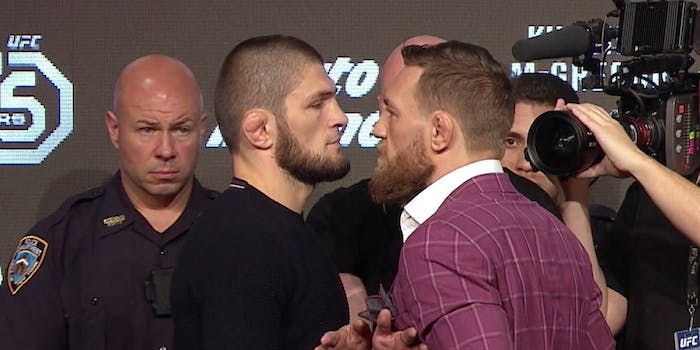 How to watch Khabib vs. McGregor at UFC 229 online

It's a clash of two titans.

Pay-per-view events don’t get much bigger than UFC 229, featuring the return of prodigal son Conor McGregor who’s attempting to reclaim his UFC lightweight title from unbeaten champion Khabib Nurmagomedov in Las Vegas on Saturday, Oct. 6. Thankfully, you no longer need cable or a satellite dish to watch at home. If you’re looking for a Khabib-McGregor live stream, here’s everything you need to know to watch online.

There are three primary ways you can order and watch online, but it’s worth noting (and repeating), the preliminary bouts are divided up between UFC’s Fight Pass and FS1 (more on both in just a bit). Here’s how to get the Khabib-McGregor live stream you’re looking for.

The easiest way to order UFC 229 is through UFC’s official website or app. Once you’ve created an account and purchased the event, either for yourself or as a gift, you can watch on your computer or through the app, which is available on all of the devices listed above.

Ordering UFC 229 on Amazon Prime is just like buying or renting a movie—only a lot more expensive. All you have to do is sign into your account and complete the standard checkout process. Then you’ll be able to stream live from your browser or from the Amazon Prime app on any of the devices listed above.

Sling TV is one of the premier live TV streaming services, and now you can order UFC PPV events directly from the service. Sling TV offers three different channel packages. To make sure you get FS1 to watch the UFC 229 undercard matches, you’ll want either Sling Blue ($25 per month) or Sling Orange + Blue ($40 per month). Both offer a great selection of sports channels, like NFL Network, FS2, and NBCSN.

Other ways to watch a Khabib-McGregor live stream:

You can also find a bar offering a UFC 229 live stream here.

Before the pay-per-view officially kicks off, there are four more bouts airing on FS1:

The good news: Every major live TV streaming service includes FS1 in their basic channel package. Here’s a quick breakdown of your options. Click the name of the service to read a more comprehensive overview. (If you need to find a FS1 live stream, here’s everything you need to know.)

If you’re willing to make a long-term commitment, you’ll save some money on a Fight Pass subscription. It costs $9.99 per month, but only $8.99 with a six-month commitment and $7.99 per month if you sign on for a full year. Not sure yet? You can try Fight Pass for a week for free—and now would be a good time to cash in on that offer.

I can’t stress this enough: UFC Fight Pass will not allow you to live stream Khabib vs. McGregor or any of the PPV portion of the event. It does, however, offer a lot of behind-the-scenes footage, including a three-part “Embedded” vlog series and the UFC 229 press conference.

UFC 229 fights will be shown on the three separate live streams. Here’s the complete schedule of events.