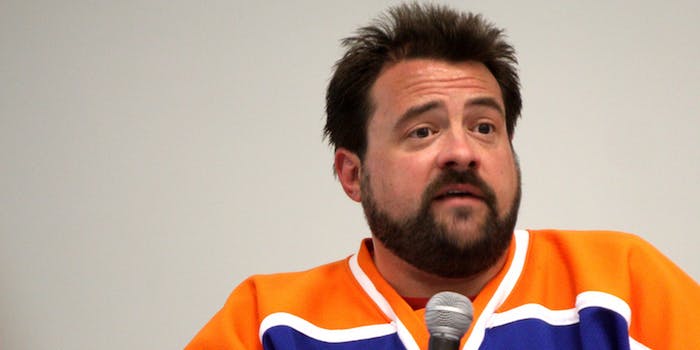 Film geeks were thrown for a loop yesterday when it appeared that Kevin Smith, the New Jersey auteur of Clerks, Mallrats, and Chasing Amy, had come out as gay on Twitter.

I have never told anyone this not even my family or close friends. Before this comes out I want to state that I am a gay proud man. #fear

Artistic missteps or no, Smith has maintained a loyal fanbase unlikely to turn on him for his sexual orientation, and his own liberal views are well known: His indie horror-comedy Red State is in some respects a hate letter to the fiercely intolerant Westboro Baptist Church.

There was the worrying fact, of course, that Smith has been married to Jennifer Schwalbach, an actress and broadcaster with whom he hosted a podcast, since 1999. They also have a teenage daughter. What to make of this sudden public announcement?

@ThatKevinSmith What? Is this a bit? If not, happy for you but hope Jen & Harley are ok w/ this.

A couple of hours later, Smith explained that he’d been hacked, then set the record straight, so to speak. Cool dude that he is, he endeavored to show maximum love and respect. (The original tweet hasn’t been deleted, either.)

Not me. Been hacked. Proud to be bi-curious, not brave enough to commit.

OK? Got that? Not gay, but never say never. Note that down in your ledger of who’s gay and who isn’t. Kind of weird that you carry that thing around—but whatever, no judgment.