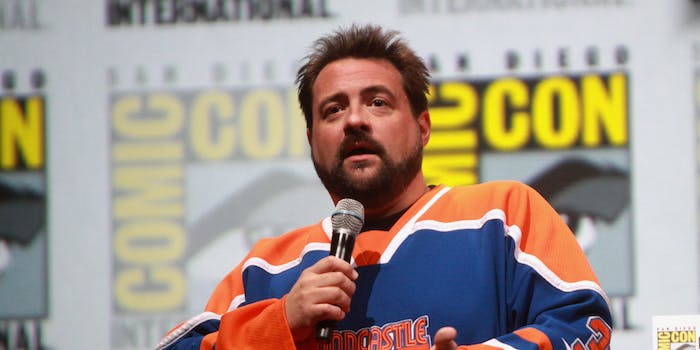 ‘No fucking movie is worth that.’

Hollywood has had to grapple with its systematic sexual harassment problem in the wake of the dozens of allegations against Harvey Weinstein this month. For Kevin Smith, it also means coming to terms with the fact that an alleged serial abuser helped launch his career. But now he’s pledging to never profit off of Weinstein again.

Smith addressed the growing Weinstein scandal on the Oct. 13 episode of his podcast Hollywood Babble-On, which was released on Tuesday. While he initially posted on Twitter about the horror of learning what Weinstein did while profiting from him, Smith elaborated the shame he felt in his career by being forever associated with Weinstein. Smith pointed out that despite what he felt, he wasn’t a victim in all of this. But several of Smith’s films were produced by Weinstein, including his most famous film, Clerks. (The podcast segment on Weinstein begins around the 85-minute mark.)

“My entire career is tied up with the man,” an emotional Smith said. “Everything I did in the beginning has his name on it, and I spent many years lionizing him, telling stories… It’s been a weird fucking week, man. I just wanted to make some fucking movies, that’s it, you know what I’m saying? That’s why I came, that’s why I made Clerks. And no fucking movie is worth all this. Like, my entire career, fuck it, take it. It’s wrapped up in something really fucking horrible.”

Someone in the audience shouted that he wasn’t at fault, but it didn’t matter for Smith.

He debated what he could do to begin to make it right. He couldn’t give away all of the money he made from 20 years ago, as some suggested, but he could make sure he didn’t profit off of Weinstein anymore. Smith vowed to donate any of the residuals—the money that he continues to make from his films—to the nonprofit Women in Film, which “advocates and advances the careers of women working in the screen industries,” because he knows how hard it is for a woman to make a film in Hollywood, even without having to deal with the Harvey Weinsteins of the industry. But if those movies ever stop making money, Smith still vowed to donate $2,000 a month to Women in Film “from now until the fucking day I die.”

“Hopefully that goes to people that get to make shit without having to deal with some fucking animal saying, ‘Here’s the price.’”