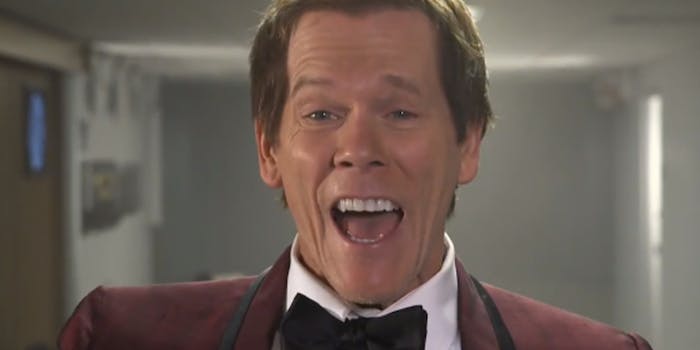 Kevin Bacon cut ‘Footloose’ on ‘The Tonight Show’ with Fallon

He still knows all the moves.

This year marks the 30th anniversary of the movie Footloose, a film that tackled the very ‘80s issue of the evils of teenage dancing in a small town. Last night on The Tonight Show, host Jimmy Fallon reminded the audience that dancing is “banned” on the show. So, naturally, guest Kevin Bacon reenacted an entire sequence from the film as his entrance, from the angsty wall-pounding and beer bottle-smashing, to the weird gymnastics interlude, to the “let’s daaaance” finale. It was pretty great—almost as great as this guy’s dance.

Props to Bacon for looking like he hasn’t really aged in 30 years. All that was missing was a John Lithgow cameo.