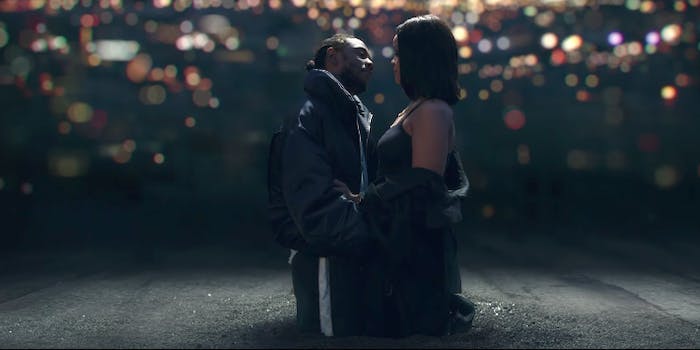 The video, released Friday, opens with a blindfolded Lamar perched upon a throne in a room bathed in red light, surrounded by scantily clad women. As one woman prepares to thrust a dagger into the rapper’s skull, the screen cuts to a de facto street fight, and the ground swallows several men as they approach Lamar.

From there, the “Loyalty” video takes a bunch of gorgeous, surreal left turns.

Cue Rihanna, who makes her entrance amidst another street fight, this time a one-on-one brawl. Lamar goes full-on Kung Fu Kenny, whooping his adversary’s ass as Bad Girl RiRi restrains him from doing any more damage. The two stars sink into quicksand, cheat death by drifting in their sports car, and put their trust to the test as Lamar dangles Rihanna off the edge of a skyscraper in arguably the video’s most striking shot.

“Loyalty” is the fourth track off Lamar’s new album, DAMN., to get a music video. It’s fitting he would drop a video with his biggest feature this week, as he welcomed J. Cole to the stage at his Detroit show on Wednesday and Chance the Rapper at his Chicago concert last night.