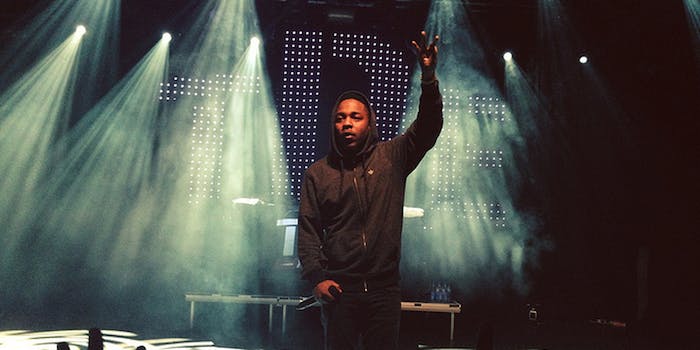 The most-talked about moment of the 2014 Grammys came after the awards, when Macklemore sent a text message to Kendrick Lamar, later displayed on his Instagram, claiming Lamar should have won the award for Best Rap Album. While many thought his social-media-blast-disguised-as-humility was in bad taste, it had some positive effects on Lamar’s Spotify traffic.

In a recent post on r/hiphopheads, it was pointed out that Lamar’s Spotify traffic increased 99 percent since the Grammys. According to a Spotify press release, Lamar had the biggest jump in traffic of any rap artist on the streaming site.

Spotify has proven an innovative tool for using data to predict and assess pop culture trends, and a platform for controversy. After being attacked by musician Thom Yorke, who called Spotify’s business model “the last desperate fart of a dying corpse,” the site revealed in December just how much artists make per song. But it’s telling that controversy—courtesy of a major platform like the Grammys — can drive people to discover an artist that might not know as well. It also didn’t hurt that Lamar’s set with Imagine Dragons on Sunday blew every other performance out of the water.

In an interview today with XXL Mag, Lamar, when asked about the Grammy snub, said of Macklemore: “He went out there and hustled and grinded. Everything happens for a reason; the universe comes back around, that’s how it go.” He added that the Grammys should make more of an effort to spotlight hip-hop and rap:

“We part of the world. We part of the movement. So I think any awards, including the Grammys, should always push for more hip-hop because it’s music as a whole, it’s not just splitting different regions. Everything moves as far as sound and vibrations, and that’s how it goes. And we are a part of that.”