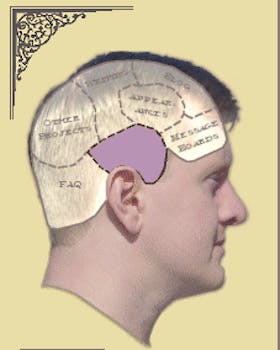 Ken Jennings turns to Reddit users once again for help with his new book -- and a bit of a promotional boost.

Jeopardy star Ken Jennings has turned to social news site Reddit for help writing his next book — and he likes what he sees.

The 51-time Jeopardy champ posted to the site’s AskReddit section yesterday asking for suggestions for the book, which he says will “prove or debunk all the nutty things that parents tell kids“

“Help me Reddit!” Jennings wrote, noting in a bit of a promotional flourish that his most recent book, Maphead, hit stores the same day. “You’re my only hope! If you heard any dubious parental warnings as a kid, I’d love to know”

Redditors flocked into the thread, dropping a good 4,000 suggestions or so. Jennings was particularly enthusiastic about a few.

Wrote redditor dingofish: “My Great-Grandmother would always warn us that if you looked at a microwave while it was on you’d go blind, because the microwaves could shoot out and cook your eyes.”

“Good one,” Jennings replied. “The title on my book proposal actually was “Don’t Stare at the Microwave!” I think that’ll be a big seller among people who want to read a book about not staring at microwaves.”

“Here’s one from my own youth,” added redditor xieish. “Wearing someone else’s glasses can permanently damage your eyes.”

“Wearing someone else’s glasses = great one,” Jennings replied. “I heard that too.”

When it was all said and done, Jennings said he’d found a “couple dozen” suggestions that “will probably make the cut for the book.” He’s promising creative credit to anyone whose idea makes it into the book.

This isn’t the first time Jennings — who goes by WatsonsBitch on Reddit, an homage to his many Jeopardy losses at the hand of IBMs supercomputer — has graced Reddit with his treasure trove of trivia and his surprisingly acerbic wit.

About six months ago Jennings took part in a live question and answer session in the site’s “I Am A” section. Many consider it to be one of the best threads ever on the site.

In fact, Jennings is a model for other celebrities who want to break into Reddit. He’s completely honest about his goals — promoting his books — all while taking part in some entertainingly raucous discussions that redditors seem to love.

Just how honest is he? Before signing off yesterday, he left with a note:

“While I’m being a total whore,” Jennings wrote “one more time: Maphead is in stores today!”