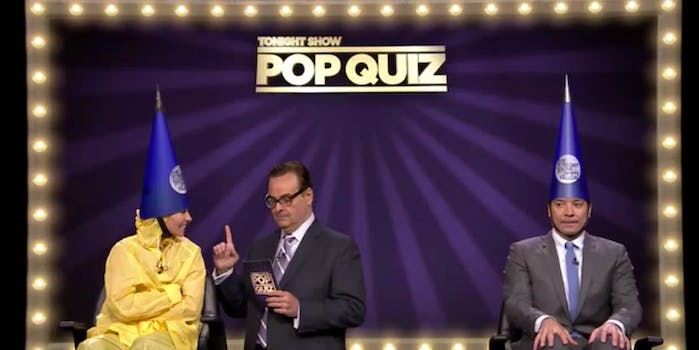 No slime or Physical Challenges to be seen.

What won’t a celebrity do on The Tonight Show?

Kelly Ripa was the latest to play along with one of Jimmy Fallon’s wacky games, and instead of performing a lip-synch, dancing, or riding a giant roller coaster, they’re playing a trivia game that looks like it came straight off the set of a ’90s Nickelodeon game show.

The basic gist is to answer trivia questions, and for every one they get wrong, they’re lifted up a little bit closer to a balloon filled with water (not slime) until one of their pointed dunce caps pierced it open.

Even though Ripa agreed to it, she donned a poncho in case she lost.

“This is terrible,” she said. “You’re supposed to ask me stuff I know!”

All for a few minutes of wacky work—and she didn’t even have to do a Physical Challenge.