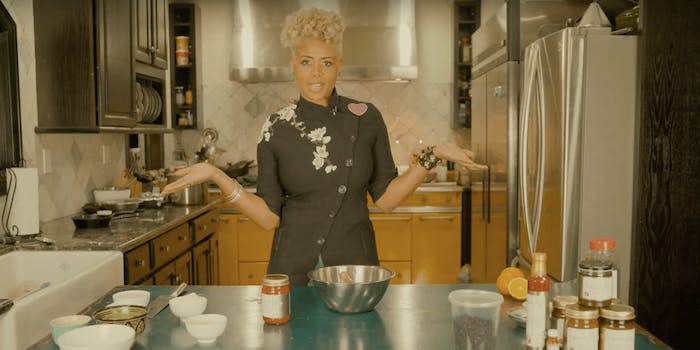 Kelis’ weed cooking show is coming to Netflix on 4/20

The singer is getting into the culinary cannabis game.

Stoner, streamers, and milkshake enthusiasts, rejoice: Kelis is cooking up something for all of you.

The singer and chef will release her new weed cooking show, Cooked with Cannabis, via Netflix on April 20, appropriately. She announced the news on social media yesterday, explaining her motivation for the show on Instagram. “As a chef, I was intrigued by the food and as an everyday person, I was interested in how powerful this topic is in today’s society,” she wrote. “In this country, many things have been used systematically to oppress groups of people, but this is so culturally important for us to learn and grow together.”

According to Pitchfork, Cooked with Cannabis comprises six episodes, co-hosted by Kelis and Portland-based chef Leather Storrs. Three professional chefs will compete in each episode to make the best three-course, cannabis-infused meal for a chance to win $10,000. Several celebrity dinner guests, including actress Ricki Lake and rappers Too $hort and El-P, will appear in the first season as well.

Cooked with Cannabis makes a logical addition to Kelis’ impressive resume. After earning international acclaim with her 1999 debut album Kaleidoscope and reaching No. 3 on the Billboard Hot 100 in 2003 with “Milkshake,” Kelis trained part-time as a saucier and graduated from Le Cordon Bleu culinary school. She has her own sauce line called Bounty & Full and released her first cookbook, My Life on a Plate, in 2015.

Netflix has married culinary arts and weed culture in a handful of shows, including Cooking on High and Breakfast, Lunch & Dinner. If any celebrity is qualified to get in on the culinary cannabis trend, it’s Kelis. And with millions of Americans currently self-quarantined, Cooked with Cannabis comes at the perfect time.