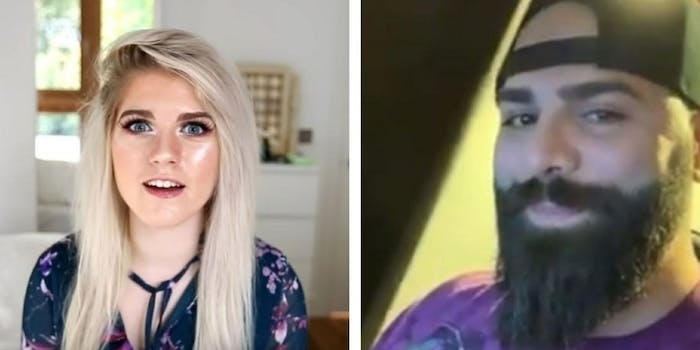 She says he's bullying her.

YouTube star Marina Joyce frightened her fans in 2016 when she posted a series of cryptic vlogs, leading to speculation about whether she’d been kidnapped or brainwashed. But YouTube star Keemstar has another theory. He told Newsweek this weekend that she might just be on drugs.

In a video posted late last week, Joyce—who has 2.1 million YouTube subscribers—said she’s “getting a lot better and I’m overcoming all the things that were holding me back.” In the video titled “Dear Haters… SaveMarinaJoyce,” she said she wants only to spread positivity and joy. But she also said she “didn’t get proper help from anyone” at the time of her crisis two years ago and she said she was broken at the time. She also said she was made worse by those who left negative comments on her videos.

In 2016, the hashtag #SaveMarinaJoyce trended worldwide, and some of her fans even contacted police to make sure she was OK. She apparently had whispered “help me” a few times on her vlog, and she gave conflicting answers when her fans asked if she was OK.

“#SavingMarinaJoyce made me realize that I needed to change some things in my life to make my life a lot happier, safer, and healthier,” the fashion and beauty vlogger said last week. “I was in danger in a lot of different ways, and that was the truth … I actually was in danger.”

But Keemstar, who runs the Drama Alert channel with 4.4 million subscribers, isn’t buying her explanation.

“None of it makes sense very vague statements after very strange vague statements for two years,” he told Newsweek. “I suggest that she’s on drugs and she denied these claims and was upset with me. I don’t think she has a right to be upset with anyone speculating when she won’t provide a reasonable explanation.”

Keemstar pressed her to be more transparent with her fans, and she tweeted that “I went blind in one eye and I spent 2 whole months in hospital which left me traumatized and confused in life. I don’t want to divulge my health issues on the internet.”

In her video from last week, Joyce didn’t give specifics about what happened to her in 2016 or why she was in so much pain at the time.

“It’s not a joke that I went through a dangerous time and suffered severely. I have thoughts constantly about telling people what had happened to me …” she said. “But I realized that’s not going to further protect me or make me safe. Which is my objective and should be your own objective, too. It’s better not to know.”

The feud between Keemstar and Joyce continued on Twitter.

I bet you’re proud of yourself to spread more lies and conspiracies about me YET AGAIN. I may have met this person but how can you just trust him, I never said or spoke to anyone about such a thing and why would I ever speak at Youtube space about it? That was all complete lies:/

@KEEMSTAR THE MEDICATION FOR MENTAL HEALTH THAT I TAKE MAKES ME GO WEIRD AND MY EYES LARGER AND BLINK MORE, IT SAYS THAT IN THE SIDE EFFECTS. PLUS I NATURALLY HAVE BIG EYES. CAN YOU STOP SPREADING LIES ABOUT ME.

I’m not your enemy I am simply a man with 4mill subscribers that has a sworn duty to bring them the NEWS! https://t.co/1dA03dlMyS