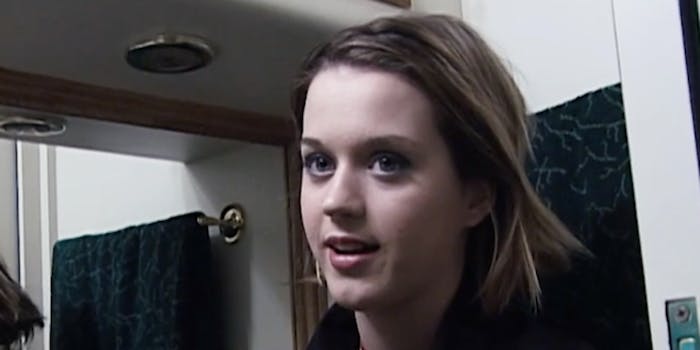 Where is that denim trench coat now, Katy?

Way back before Katy Perry took Riff Raff to the VMAs and shot fireworks from her boobs, she was a normal teenager with chunky highlights and a fondness for Patty Griffin.

In this 12-minute clip, we see Perry in 2001 on her first tour, when she was just 17 and signed to Red Hill Records. The video was posted by Jim Standridge, who explains he has 90 minutes worth of footage, and that he found this while cleaning:

“The other day I was cleaning out some old footage in my office and found 90 minutes of raw footage I had totally forgot about. Pamplin had the originals but I had always made backups of everything I shot. I quickly put together a short edit of the experience with Katy. Funny how she spent so much time messing with her hair….”

She hadn’t hit her pop phase yet, and the live footage shows her very much embracing the folk lifestyle, and touring with Christian bands who laugh at her jokes.

Also, the denim trench coat she’s wearing a little after the four-minute mark is a reminder of how universally awful fashion was in 2001.