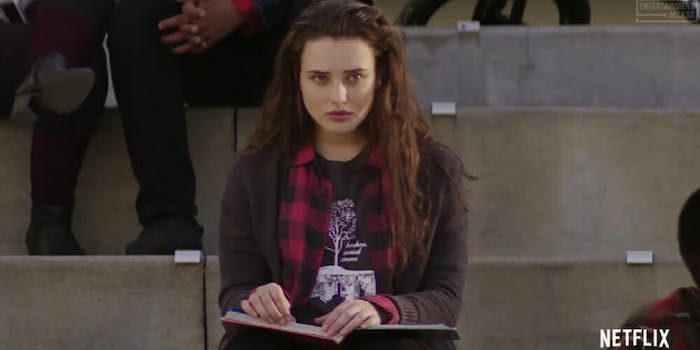 Hannah from ’13 Reasons Why’ was supposed to be in ‘Avengers: Endgame’

Katherine Langford's only scene was axed from the film.

Katherine Langford, the actress who plays Hannah in 13 Reasons Why was supposed to be in Avengers: Endgame. But her only scene in the film ended up getting the ax.

The film’s directors, the Russo brothers, had previously stated that Langford was supposed to play the teenage version of Morgan, the daughter of Tony Stark (Robert Downey Jr.).

In the cut scene, Stark visits the metaphysical world and runs into teenage Morgan.

“There was an idea that we had that Tony was going to go into the metaphysical way station that Thanos goes in when he snapped his fingers. And that there was going to be a future version of his daughter in that way station,” Joe Russo said on the HappySadConfused podcast.

The brothers said that the scene was intended to let Stark make the sacrificial snap that wipes Thanos and his army from existence with peace of mind.

“His future daughter forgave him and sort of gave him peace to go,” Joe Russo said.

His final goodbye was presumably instead filmed with Pepper Potts (Gwyneth Paltrow). Potts has been by Stark’s side as his love interest since the very first Iron Man film.

The brothers said that the scene was ultimately cut because it would have made the film much more complicated than it already is. They also said the audience wouldn’t have the same emotional connection with teenage Morgan as with the younger Morgan.

“It was just too many ideas in an overly complicated movie,” Joe Russo said. “What we realized about it was we didn’t feel an emotional association with the adult version of his daughter. So it wasn’t ringing to us and resonating with us on an emotional level.”

In Avengers: Infinity War, Morgan was introduced to audiences in a dream Tony had. She was then a reality in Endgame as Stark and Potts’ child. The character is played by 6-year-old Lexi Rabe.

Langford is best known for her role in Netflix’s 13 Reasons Why. In 2018, Langford was cast as Stark’s daughter—though we didn’t know it at the time. Her role was widely kept under wraps, as were most things about the film.