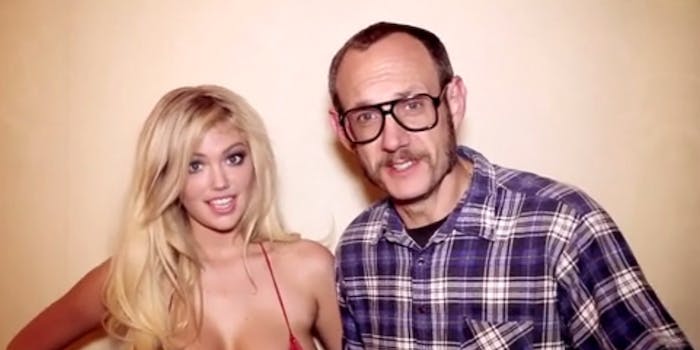 If Upton didn't know the sleazy side of the supermodel business before 2012, she was certainly introduced to it then.

If you happen to recognize Kate Upton, it’s probably for one of three reasons: 1) You’re a big fan of the Sports Illustrated swimsuit issue; 2) You can’t escape those damn Game of War trailers (no matter how hard you try); 3) You watched her star in a video in which she’s demonstrating a dance called the Cat Daddy that she now says was released without her knowledge or consent.

Upton—now a 22-year-old supermodel—told Vogue UK for the June issue that she was appalled that the video was released online and proceeded to go viral.

Writes author Alexa Chung in her profile of Upton:

Upton’s sweet, girl-next-door face (depending on where you live) is the perfect foil for her personality: she’s a woman with strong opinions. Terry Richardson found himself on the receiving end of her wrath in May 2012, when he uploaded his now infamous video of Upton in a teeny-weeny bikini doing the Cat Daddy, a dance craze that appears to involve a lot of grinding, “paws” aloft. The video received millions of hits on YouTube — not to mention a number of slow-motion versions for the more discerning customer — but, at the time, Upton was horrified because the behind-the-scenes video had been filmed for fun, not something she expected would make the final cut.

So, that sounds sleazy, right? It’s not the first time Richardson has been accused of that.

This from a 2014 New York magazine profile: “He has cultivated a reputation of being a professional debauchee, a proud pervert who has, outside his commercial work, produced a series of extremely explicit images—often including himself naked and erect—that many find pornographic and misogynistic, and which can make viewers distinctly uncomfortable. In recent years, a number of the models in those images have indicated that they, too, weren’t altogether comfortable, filing lawsuits and, increasingly, speaking up in essays and interviews.”

Said Richardson in that profile, “When people call me a pedophile and fucking bullshit, that’s a horrible thing to say about someone.”

And now this Upton accusation. Me? I’d never seen the Cat Daddy video until 15 minutes ago, and after watching it, I can see why Upton thought she was exploited. Sure, she knows she’s on camera and that she’s wearing a tiny bikini, and she knows that whomever is behind the camera is actually filming her while she dances.

But she stops after 16 seconds of performing, she covers up, and sheepishly says with a smile, “That’s it. That’s all you guys get.” And if she really believed it was a fun behind-the-scenes video that would not be released to the public, yeah, she’s got a good case for thinking Richardson treated her poorly.

Did she stand up to Richardson when she discovered it had gone viral? “Yes, I did. I was like, ‘That was disrespectful, you could have told me!'” She couldn’t stay angry: the video helped to secure Upton’s global fame. “Now, obviously, it’s fine,” she says. I ask Richardson whether he feels somewhat responsible for Upton’s rise to fame. “No,” he demurs, “Kate was born a star.”

A star who apparently got to know the downside of the supermodel business real fast.