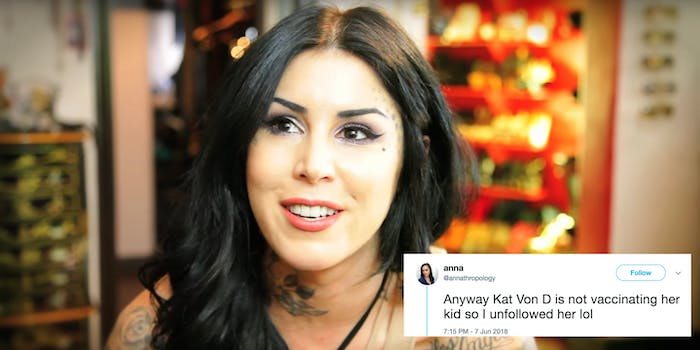 Being a vegan mom? Cool. Being an anti-vaxxer? Not cool.

Kat Von D, a tattoo artist and model known for her makeup line, revealed via Instagram on Friday that she and her husband Leafar Seyer are expecting a baby. The celebratory news provoked the ire of the internet because Von D included another detail: She doesn’t plan on vaccinating her coming child.

In her post, Von D writes about the “unsolicited advice” she expected upon announcing her pregnancy. She lists things she thinks she and her husband will be judged for, including having a home birth, eating vegan, and being against vaccinations.

And, if you don’t know what it’s like to have the entire world openly criticize, judge, throw uninformed opinions, and curse you – try being an openly pregnant vegan on Instagram, having a natural, drug-free home birth in water with a midwife and doula, who has the intention of raising a vegan child, without vaccinations.

As Jezebel pointed out, the anti-vaccine attitude isn’t normally associated with vegan or animal rights advocacy, and she’s not associated with a generally anti-vaccine group like Scientology, so it’s unclear what led Von D to this belief. But as a public figure, the implications of her statement go beyond just the health of her own child.

Celebrities, most notably Jenny McCarthy, have been proven to have a direct impact on the number of parents opting out of vaccines. McCarthy’s campaign against the MMR vaccine, which she blamed in part for her son’s autism diagnosis, was followed by record numbers of measles cases in the U.S.

Vaccine rates have gone back up since a study linking MMR to autism was retracted, but anti-vaccine sentiment is still a major concern, especially in affluent areas.

Following her Instagram post, Von D appeared to lose support from many of her followers—and makeup customers.

Kat Von D just admitted to her 7 million followers that she won't be vaccinating her child, aka potentially endangering the health & safety of her child and others around them. Don't support her brand. There are plenty of makeup brands out there that do not spread anti-vax lies.