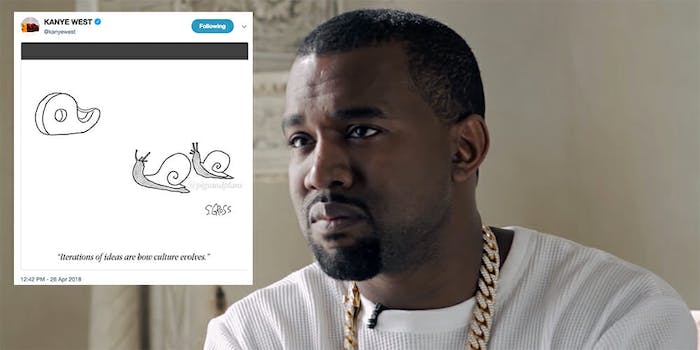 Kanye West’s vigorous return to Twitter has been the talk of the internet in recent days. His tweets have always had a philosophical edge, and now they’ve morphed into something more, venturing into far-right politics and even attracting the president’s approval.

But the hip-hop artist’s bombastic musings took another turn Thursday when West tweeted out classic New Yorker cartoons—and added his own Twitter quotes as captions. People have been jokingly adding West quotes to the comics for years, so West’s move to do so brought full circle a meme many years in the making and was, in typical West fashion, totally meta.

As far back as 2010, when West first rocked the Twittersphere and the character limit was still 140, early memers were slapping his most quotable turns of phrase on New Yorker cartoons and adding a now-vintage hashtag: #kanyenewyorkertweets.

Thanks to the folks over at music news site Pigeons & Planes, the Kanye-philosophy-meets-highbrow-cartoon memes returned this week in a 10-post thread with some of his newest tweets as captions.

West took it from there. He reposted the cartoons with his own quotes in what can only be decoded as a commentary on art commentary. In other words: a great self-meme.