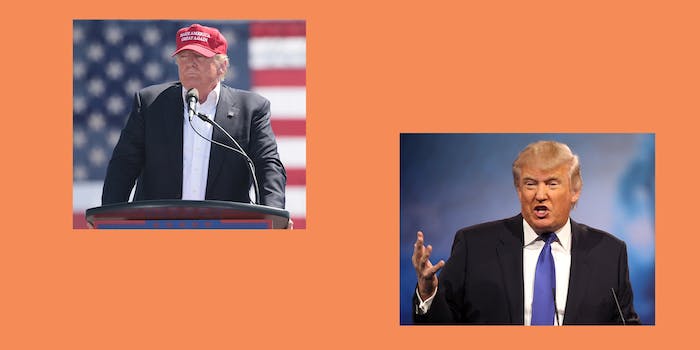 Like it or not, Kanye made the album of the year—and Trump proves it

2016 was a year of big egos and troubled trolls.

Kanye West, freshly blond and recently hospitalized amid mental health concerns, met with President-elect Donald Trump on Tuesday. For many fans, it was an indefensible betrayal that further normalized a cyberbully. “Kanye jumped the shark” social media posts followed suit.

But like it or not, the Manhattan rendezvous between Trump and his most famous apparent apologist cements West’s February masterpiece, The Life of Pablo, as the album of the year.

Arbitrarily ranking the year’s art is an annual jostle for people who love lists. When professional critics gather to crown a winner, they think about the times we live in. Music is a soothing, guiding compass; protest-driven, counterculture releases are championed for reacting to difficult history.

Over at Rolling Stone, which has already crowned Beyoncé‘s soaring Lemonade as the AOY, Rob Sheffield writes that she “shut everyone else down this year with a soul-on-fire masterpiece, testifying about love, rage and betrayal that felt all too true in the America of 2016.” He adds that Lemonade “doubles as her portrait of a nation in flames.”

But 2016 wasn’t meditative and beautiful like Solange’s A Seat at the Table, which Pitchfork crowned this week as its AOY. The year was overtaken by anti-heroes in a stitched-together country, ripe with casual misogyny. It was Elvis meeting with Richard Nixon, bowing to the state. It was a death to icons. It was a mental breakdown, and Pablo is its prophetic and advanced history—Nero’s fiddle while Rome burns.

While your timeline was busy complaining about Kim Kardashian‘s unhinged husband, you may have missed the actual music. Pablo burns the candle at both ends like the kind of mixtape rap fans used to buy out of trunks when there was no Tidal; it’s joyful, inspiring, narcissistic, beautifully curated, and expertly sourced. With the project, the 39-year-old contracted labor from Post Malone, Desiigner, Young Thug, and Chance the Rapper—four performers born in the ’90s who went on to dominate the radio in 2016.

No other West album features a better opening suite of four songs than Pablo‘s humanist fits of touch-and-go offerings. It’s rap’s Abbey Road, a blender of pop ideas that don’t need more than two minutes to land: There’s a 16-second sermon from Kirk Franklin, confessionals from Kelly Price, a heartbreaking Pastor T.L. Barrett sample that sets the groundwork for a rap about bleached assholes, a 20-second a capella kiss from violinist Caroline Shaw that sparked its own thread of forum fan theories, and Sister Nancy’s stirring “Bam Bam” sampled in there as an outro.

During that block, West milks cameos perfectly suited for what Kid Cudi, Rihanna, and Swizz Beatz do best. And “Pt. 2” was built around and gave shine to Desiigner’s “Panda,” which dominated urban radio during the spring and summer. There was so much going on in this record that a man in Japan, who could not legally stream Pablo, made his own Pablo from its list of samples.

When West took this thing on the road, he created an apocalyptic mosh pit as he hovered on a Roomba-like floating stage that preyed upon our impulses to huddle around fame and lose our minds. It was so loud that Chance the Rapper thought he had internal bleeding.

West was at a Hillary Clinton fundraiser in January, so today’s Trump Tower meeting may be an Andy Kaufman-esque stunt that plays with the notion of star power. The president-elect got a media distraction from it just the same; and yet for detractors, the gesture is inexcusable.

While Lemonade subverted the Super Bowl and HBO, it’s palatable enough to be recognized at the CBS-sanctioned Grammys. It also failed to rally enough souls to the polls, despite Beyoncé’s best efforts. In a year when America fell to the trolls, West trolled the hardest.