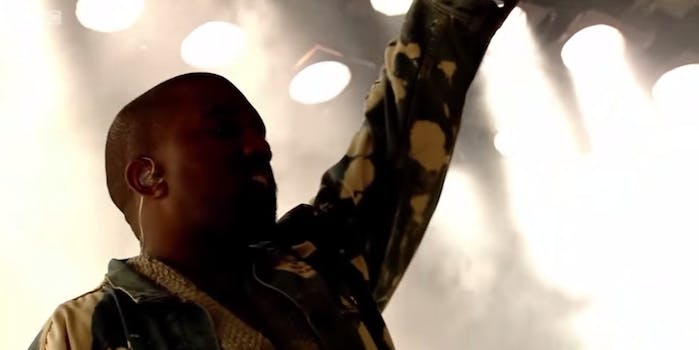 And you need to read the bungled closed captioning.

Kanye West took the Glastonbury stage Saturday night for a two-hour headlining performance. The high-profile celebrity was there amid rampant British protest—more than 130,000 signatures adorned a MoveOn.org petition urging festival organizers to cancel his booking—and his set was interrupted by a stage crasher.

And while the gambling market was taking bets on how long his inevitable onstage rant would go, West mostly deferred to his Bible-thick songbook. Though, sure, he also worked in Queen’s most iconic rock epic, “Bohemian Rhapsody.”

The festival was broadcast live across England on the BBC. A bad language warning preceded the set and British TV did not censor West’s performance. It did, however, struggle to keep up with its closed captioning. The bunlged screengrabs were an instant Twitter hit.

BBC subtitles have given up. pic.twitter.com/iCLAzwK04P

Confusion reigns: Kayne and #Kanye are battling it out for top trending rights – but at least we have subtitles pic.twitter.com/U5iVkIyBKp