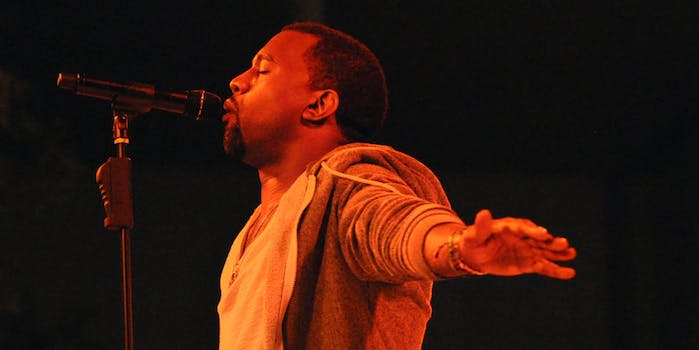 'I could see it through his artificial meat eyes.'

The multimedia event that is Frank Ocean‘s album release reached its peak this weekend, and it’s given us much to consume. Including Kanye West‘s poem about McDonald’s.

In addition to new album Blonde, Ocean released the magazine Boys Don’t Cry in four cities. For those lucky enough to get the glossy, there’s a poem about the fast food chain by Kanye. Naturally, it’s called “The McDonald’s Man.” And if the accompanying photo—which people were talking about more than a year ago—is to be believed, Kanye blows through the drive-thru in his Lambo. If James Corden wants him to do Carpool Karaoke, maybe he’s looking in the wrong place.

The salad bar and the ketchup made a band

Cus the French fries had a plan

I know them French fries have a plan

I know them French fries have a plan

The cheeseburger and the shakes formed a band

To overthrow the French fries plan

I always knew them French fries was evil man

Smelling all good and shit

I don’t trust no food that smells that good man

I don’t trust it

Them French fries look good tho

I knew the diet Coke was jealous of the fries

I knew the McNuggets was jealous of the fries

I could see it through his artificial meat eyes

And he only be there some of the time

Everyone was jealous of them French fries

Expect for that one special guy

Read one way, this might come off as bad slam poetry. Read another, it might be something Kanye sings to his daughter. I dunno, I think we’re gonna need a video for this one.

As of Sunday afternoon, McDonald’s still has not tweeted about this.