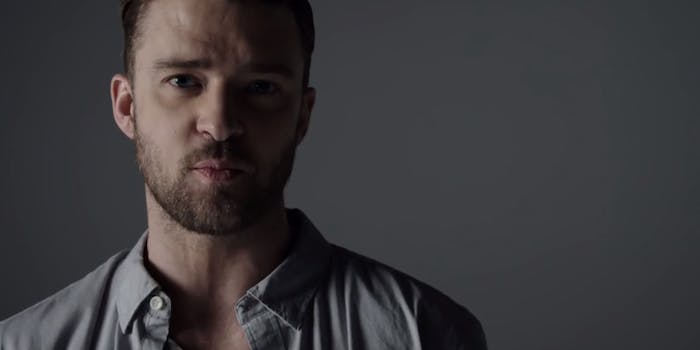 Justin Timberlake’s NSFW “Tunnel Vision” is back on YouTube

When Robin Thicke released his catchy summer hit (and NSFW video) “Blurred Lines,” people joked that it was the song Justin Timberlake wished he’d written. JT’s new single, “Tunnel Vision,” looks like an answer to the haters. And despite all the blatant nudity, it’s still on YouTube—reinstated, now with an age warning.

Unlike its predecessor, this one has yet to face YouTube’s banhammer.

In “Tunnel Vision,” Timberlake is the good twin to Thicke’s evil. The “Blurred Lines” video featured Thicke, Pharrell, and T.I. prancing around a minimalist stage with three models in nude thongs and no tops. After a few days, the video was removed from YouTube and replaced with a safe-for-work version in which the girls wear plastic outfits:

YouTube bans videos with nudity unless it’s deemed artistic, but the site’s standards are often arbitrary. With so many videos being uploaded, it’s hard for YouTube to really scrub itself of any X-rated content.

Timberlake’s “Tunnel Vision” is not that different from “Blurred Lines.” Both videos feature three topless women in nude thongs, dancing. In “Tunnel Vision,” Timberlake and rapper Timbaland remain clothed. Both feature questionably nonconsensual lyrics like Thicke’s “I know you want it” and Timberlake’s “I know you like it.” Timberlake splashes that lyric big across the back wall of his video while Thicke’s background features the far more subtle “Robin Thicke has a big dick.”

The move perfectly encapsulates the randomness of a YouTube ban. Timberlake’s video is arguably even more sexual; the models rub their hands over their bodies and roll around in ecstasy. In Thicke’s, the nudity is playful and strange. There’s nothing really sexual about it. It’s just there. The models walk around, dance, act silly, and make faces. They’re not really trying to be sexy—they just happen to be beautiful and naked.

What does it say that Timberlake’s video was allowed and Thicke’s remains banned? YouTube probably isn’t thinking about it that much. Timberlake’s nude women have serious, sexy faces; Thicke’s are smiling. That’s the only real difference that exists.

The videos are so bizarrely similar. Ban both or ban neither. YouTube looks ridiculous here.