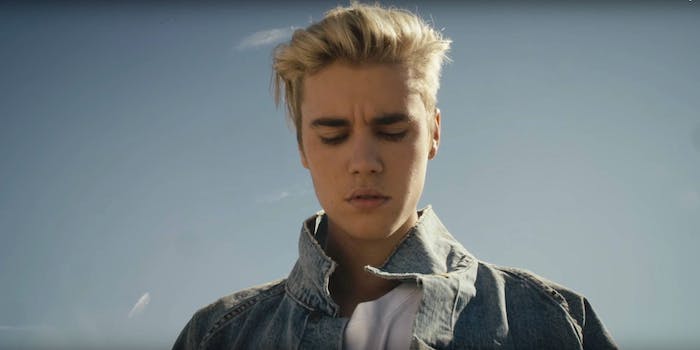 He just ousted Drake and The Beatles.

Justin Bieber made history this week with a record-breaking 17 songs simultaneously appearing on the Billboard Hot 100 chart. It’s not that Bieber has 17 simultaneous singles off his new album, Purpose, but that he’s mastered something the music industry is only just starting to understand: the power of the YouTube view.

YouTube numbers have counted toward Billboard charts since 2013, but labels still largely follow the lyric-video-to-official-video model. Bieber’s team was a little more savvy.

Purpose dropped earlier this month with a corresponding video for each song released on Bieber’s Vevo channel. Per tradition, the big singles have full-blown, high-budget music videos starring Bieber himself. A majority of the 19 songs have simpler videos starring dancers.

And those views add up. Here are Bieber’s Hot 100 standings this week, according to Billboard:

Until now, the record for the most spots simultaneously held on the Hot 100 chart was 14, a record set by the Beatles in 1964 and matched by Drake earlier this year.

Unfortunately for Drake, Apple Music video views don’t count toward Billboard’s charts, which means that, even though millions of people loved his “Hotline Bling” video (and even made a meme out of it), none of those video plays affect his success on the charts. The rapper did not upload his video to YouTube as part of his partnership with Apple.