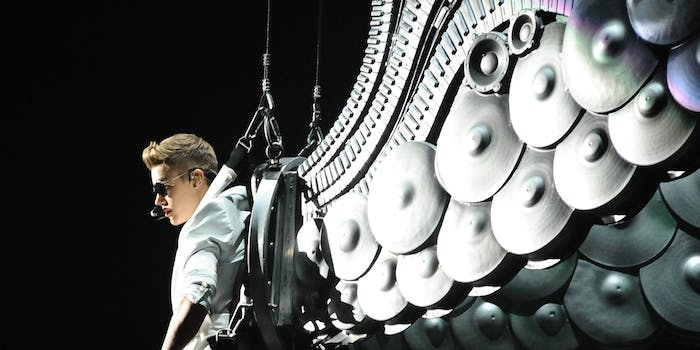 Watch Bieber flex his moves on the ice.

Perpetual headliner and pop music genius Justin Bieber scored a hockey goal Tuesday night at the Los Angeles Kings Valley Ice Center. He knew it was a sweet shot, and posted the accompanying, self-aggrandizing language: “My dangles were unreal.. did u see that shot? I’m number 20. #dangles #20 #iceicebaby #uthoughtthiswasagame #imadethatpuckmybitch.”

The Valley Ice Center confirmed to The Daily Dot that Bieber was in the house Tuesday, and that he was playing in a men’s league game. His team is called the California Leafs, an Ice Center employee said, and the Leafs play at the Center’s Division 6 level—that’s listed as “Beginner/Novice.”

Maybe not that impressive, given the level of competition? Come to think of it, the goal inherently stands out because 85 percent of the United States did not grow up with ready access to ice and hockey equipment. Had he banked in a competent J or thrown a tight spiral into an inflatable and promotional picture of a receiver stretching his arms with a hole in place of his hands, we’d all roll our eyes.

But the American icon is from Canada and reportedly grew up on the ice. Look, nice handle and touch, but playing in the kiddie pool of men’s league hockey isn’t something to hashtag home about.