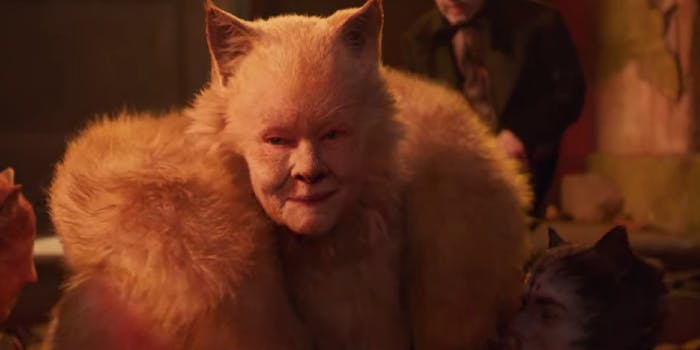 'I’ve only seen a picture of myself.'

Dame Judi Dench is unperturbed by the public dragging Cats received after it was released in theatres last year.

The film, which stars Dench as Old Deuteronomy, was mauled by critics for lacking a plot and for scarring audiences with its computer-generated fur and whiskers. Even worse, it landed Dench a nomination for Worst Supporting Actress at the Razzies.

But Dench told BBC Radio 4’s “Front Row” program that she’s never actually seen herself in the live-action adaption of the classic musical.

“I haven’t seen it,” she said. “I didn’t read anything about the response to it, nor have I seen it, and I’ve only seen a picture of myself.”

The 85-year-old actress also said she was “aware of the response [to the film] only slightly,” then added, “I think people have been rather kind to me.”

When told of her own nomination, Dench responded: “Oh, am I? That would be good. As far as I know, that’s a first!”