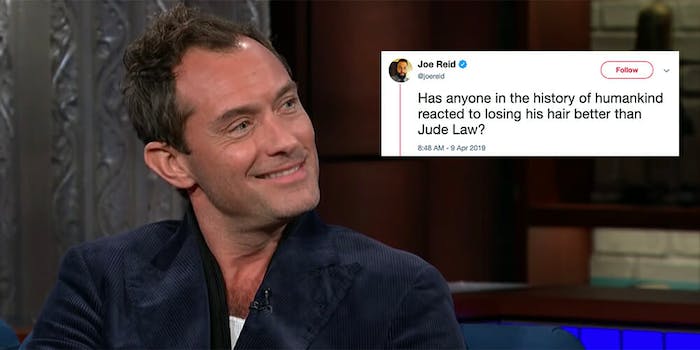 Filming for HBO’s sequel to its dramatic mini-series, The Young Pope, is underway, and Twitter already can’t get enough. Not of the show itself, but of the recently released on-set photos of leading actor Jude Law sporting an itsy-bitsy, teeny weeny swimsuit. The thirst is real, folks.

Users’ collective pining for the recently announced Fantastic Beasts star was so intense that it earned them a Twitter moment Tuesday. Those who weren’t immediately struck #dead by the images and could still manage to get a few words out had one message: It was a good morning, indeed.

Good morning to these photos of Jude Law filming THE NUDE POPE. pic.twitter.com/9C6Hmi19h4

Even at 46-years-old and with media outlets noticing his thinning hairline, Law had all of Twitter shouting Amen.

Has anyone in the history of humankind reacted to losing his hair better than Jude Law?