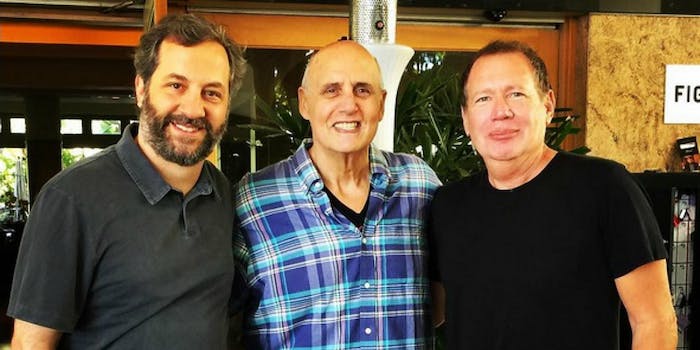 The picture with Apatow, Shandling, and the Boss is a classic.

The comedy world was shocked and saddened last week by the death of iconic standup comedian and TV star Garry Shandling.

Director/producer Judd Apatow was one of the comedy minds affected by the loss of Shandling, releasing a statement that said, “Garry would see the ridiculousness of me being asked to sum up his life five minutes after being told of his passing. It is a perfect, ridiculous Larry Sanders moment. I can imagine how Hank would handle it, but I just don’t know how to sum up someone I loved so much who taught me everything I know and was always so kind to me. I am just too sad. Maybe tomorrow I will do better.”

In the days since, Apatow has paid extraordinary homage to the star of The Larry Sanders Show—which recently Shandling had negotiated to bring back to HBO—on his Instagram account.

On Sunday, Apatow and other comedians like Larry Sanders co-star Jeffrey Tambor, Sarah Silverman, Bill Maher, Kathy Griffin, and Richard Lewis participated in one final game of basketball at Shandling’s house to honor the 66-year-old.

With love for Andy.