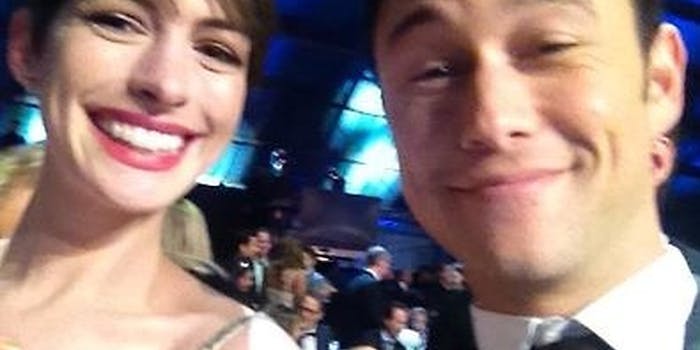 One of JGL's hitRECord buttons mended a broken strap at the Critics' Choice Awards Thursday.

When Anne Hathaway tore the strap on her dress, a famous pal swooped in to save the day.

Joseph Gordon-Levitt shared a photo on his Facebook page after he helped The Dark Knight Rises co-star Hathaway fix a wardrobe malfunction with the aid of a pin. Since he posted the photo at 9:22pm ET Thursday, the photo has received more than 209,000 likes and has been shared more than 2,200 times.

It appears the photo was taken at the Critics’ Choice Awards Thursday, where Hathaway picked up an award for her Oscar-nominated turn in Les Misérables and Gordon-Levitt’s movie Looper snagged a gong for Best Sci-Fi/Horror Movie.

Gordon-Levitt has a stake in the Oscars too, with his film Lincoln the most-nominated flick this year. But even with Hathaway’s film rivalling his own in the Best Picture race, the noted Tumblr user still manages to be a true gentleman.