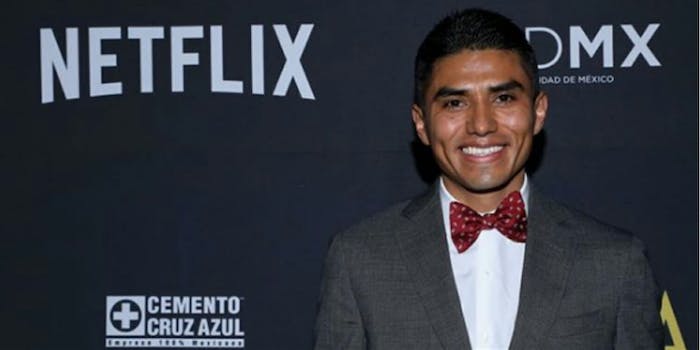 Jorge A. Guerrero, who plays Fermín in Netflix’s award-winning drama Roma, has applied for a visa to visit the U.S. three separate times, and three times he has been denied.

In a Spanish-speaking interview with Mexican program De Primera Mano, translated on Thursday by BuzzFeed.News, Guerrero said even letters from Netflix and Roma director Alfonso Cuarón were not enough to grant him entry to the U.S.

“The last time I tried to give it to the consulate officer, she grabbed the paper and literally returned my passport through the window opening,” he said.

Guerrero has not been able to attend numerous award shows and even screenings of Roma, despite having been invited. As for why U.S. officials are repeatedly denying him entry, Guerrero said he can’t be sure. “They don’t really give you an explanation of why they’re not giving it to you,” he said, via BuzzFeed. “The consular officers are very concise in that sense. They only tell you that you are not accredited to have the visa.”

Luckily, Guerrero has remained upbeat. Despite the fact that he may be unable to attend the upcoming Oscars on Feb. 24, he said he is not a victim of racism. “I don’t consider myself a victim at all. I’m an actor and I love my job, I’m going to keep doing it right,” he said.

As for the future? Guerrero said he would love to continue traveling to attend screenings, award shows, and anything else. Were something to get in the way, however, he is not going to let it get to him.

Hopefully, Guerrero’s visa issues will end before the Oscars arrive next month. Roma has received 10 nominations, including for best picture and best director.