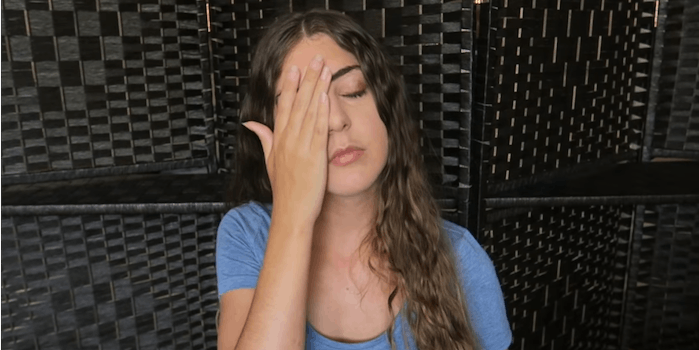 A U.S.-based travel vlogger named Jordan Taylor who fills her YouTube channel Travellight with stories of her globe-trotting adventures recently posted a video describing a traumatizing experience she underwent on a trip to India. Shadowy figures, sexual harassment, no water for days, and hotel chain OYO Rooms investigating the incident and reportedly closing down a branch.

In the video, she describes a wonderful experience in a beautiful country, which she traveled with her boyfriend Livio. It wasn’t until he left that the trip turned sour. In her video, Taylor described the harrowing experience of being trapped in her hotel room in Dehli with men looming outside the door, with no air conditioning or access to drinkable water.

The video started with a disclaimer that Taylor repeated several times, assuring viewers that one unfortunate event does not define a country. She took care to explain how much she enjoyed her time in India before the incident, and her genuine intent to visit the country again.

“This is a video about something traumatizing that happened to me. I felt that it was right to share this, or rather, that it would be wrong to just sweep it under the rug and silence myself on this matter,” the disclaimer began. “Otherwise, I had a great time in India and met many great people. Bad things can and unfortunately do happen all over the world. I look forward to visiting beautiful India again in the future.”

According to the video, Taylor spent all but the last few nights of her trip with her male companion. He left several days before she was set to depart, and despite their best attempts to conceal his exit, the staffers of the hotel they were staying in were not fooled. Their behavior toward her took an immediate turn, and she said they began following her and calling her room.

Two days before she was supposed to leave, a knock came at her door. One of the male employees was outside, demanding that she let him in. According to her account, when she refused he came back and turned off a switch outside the door that controls the AC. He then told her that he would need to enter the room to repair it, which she again refused. Her Wi-Fi was also cut off, she says.

She described two days of consistent harassment. At about the nine-minute mark she inserted footage of a shadow outside her door. It hovered there, silent, before she received a call again requesting that she open the door.

“I did feel very certain that if I did, then something very bad would happen. And I still think that it would have,” she said.

The last few days of her trip were spent watching shadows lurk outside, waiting for her to slip up. To get too thirsty, too hot. She described feeling completely helpless but forcing herself to stay calm. She never opened that door, instead opting to make an early morning getaway on the day of her departure.

Despite feeling frustration at her helplessness, and the difficulty of moving on and feeling safe again, she said she is looking forward to visiting India again in the future.

She updated the description of the video on YouTube not long after posting it.

“GREAT NEWS UPDATE!! Within 24 hours of releasing this, the hotel where this happened was SHUT DOWN by upper management in the chain,” the description reads. “It came out that this has happened to other women who stayed there in the past as well! NO MORE. Action has been taken!”

The almost 20-minute video ended with a message for other women who might have experienced similar treatment.